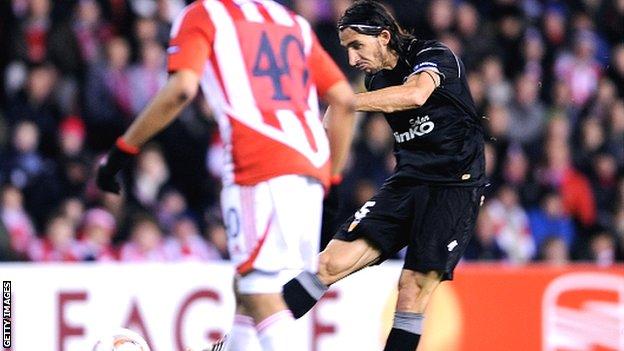 Stoke's hopes of advancing in the Europa League were dented as Valencia won the first leg of their last 32 tie thanks to Mehmet Topal's stunning goal.

Asmir Begovic made a fine save to deny Jonas before Topal fired an unstoppable shot into the top corner from 30 yards.

Peter Crouch came close to levelling it with an acrobatic strike, while Sofiane Feghouli's effort came back off a post.

Stoke pushed for a late equaliser but Valencia will take an away goal into the return leg in Spain on 23 February.

They were worthy winners for a performance that combined flair, grit and hard work to bring Stoke's unbeaten home record in Europe to an end.

The Potters have now lost their last six matches in all competitions, but the one-goal deficit means they can go to the Mestalla with hope.

Valencia had lost their previous eight matches against English opposition but they currently sit third in La Liga and it was easy to see why.

After surviving an early scare when Jon Walters dragged wide inside 30 seconds, the Spaniards utilised their technical brilliance to take control.

They lined up with a fluid 4-2-3-1 formation in which full-backs Bruno Saltor and Jeremy Mathieu operated mainly as wingers and the brilliant Jonas dropped off striker Aritz Aduriz to orchestrate most attacks.

Stoke caused problems of their own with a more direct approach, but it was Valencia who carried the greater threat going forward.

Jonas showed quick feet to draw a superb one-handed stop from Begovic, while both Feghouli and Pablo Piatti went close as the visitors probed for an important away goal.

It duly arrived - and how. Topal abandoned his holding midfield role to venture upfield and with Stoke allowing the Turk too much time and space, he arrowed a 30-yard screamer into the top corner.

The strike was worthy of winning any match, but Stoke almost responded in kind as Crouch fired narrowly off target with a perfectly-timed overhead kick from Jermaine Pennant's right-wing cross.

Stoke had suffered only one defeat in their 10 previous European matches and the home fans continued to urge their side forward.

But it was Valencia who continued to dominate after half-time and Robert Huth diverted Feghouli's cross to safety.

Huth again denied the Algerian by deflecting his low strike on to the upright after a slick counter-attack, and Stoke were fortunate the rebound was diverted away by Begovic with Aduriz poised.

At the other end, a Pennant corner was prodded wide by Huth and substitute Ryan Shotton called Vicente Guaita into action with a deflected drive.

As the half wore on the match became scrappy and heated, with several nasty challenges flying in, and Tino Costa was fortunate to escape punishment after a studs-up challenge on Dean Whitehead.

"It was a great occasion for everybody and we were playing a top team. We needed an early goal, we were desperate to score first, and we had a couple of good chances.

"They scored first and that took the pressure off them. For the goal I was disappointed we never got to the ball quick enough but as soon as he hit it was a goal.

"There were some very, very bad challenges. We've been caught a few times in our last couple of games. The ref had a great view and the linesman as well."