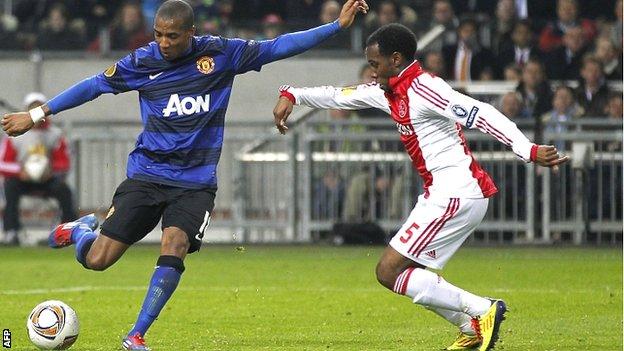 United struggled to get going in the first half and David de Gea produced a brilliant save to deny Siem de Jong.

But the visitors looked far stronger after the break and Young put them ahead with a drilled finish.

Hernandez doubled the lead late on to ensure United take two away goals into the second leg at Old Trafford.

That match takes place on 23 February and Sir Alex Ferguson's men will be confident of booking a last-16 meeting with Lokomotiv Moscow or Athletic Bilbao.

Ferguson insists his side are over their Champions League group-stage exit and their professional display in the Amsterdam Arena just about suggested as much.

United were nowhere near their best in a cagey opening 45 minutes, but after Young broke the deadlock the result never looked in doubt.

It was the first time they were competing in Europe's second-tier competition since 1995 and that perhaps went some way to explaining their cautious start.

A team containing six changes from Saturday's win against Liverpool sat deep in their 4-4-2 formation, allowing Ajax to establish a tidy rhythm.

The four-time European champions might not be the force they once were but a philosophy of nurturing young talents to play slick, flowing and intelligent football continues to run through their side.

Left-back Dico Koppers personifies their style and it was the Dutchman who created the first opening, intercepting a poor Jonny Evans pass before racing clear but shooting tamely at De Gea.

United's attacks lacked urgency and structure, while at the other end Miralem Sulejmani was troubling them with crosses from the left.

One such ball on 27 minutes could only be cleared to Aras Ozbiliz, whose goal-bound volley was blocked by Fabio da Silva.

Nani wasted a fine chance to open the scoring when he blazed over from an angle with Wayne Rooney unmarked to his left, but Ajax were soon back on the front foot.

De Jong sent a 30-yard strike towards the top corner, only for De Gea to turn it round the post with a stunning save, and the same man headed over from another inviting Sulejmani pass.

On the stroke of half-time Ajax wanted a penalty when Rio Ferdinand clattered Sulejmani. It was not clear if the challenge was inside the area, but referee Gianluca Rocchi did not even give a free-kick.

Whether that served as a wake-up call or Ferguson delivered a rousing dressing-room speech, United started the second period in pulsating fashion.

Nani's shot was tipped over, Hernandez saw a penalty appeal rejected and Kenneth Vermeer saved well from a deflected cross.

United were now encamped around the Ajax box and it came as little surprise when they took the lead.

Nani's centre found its way to Young and the England international stepped inside Vurnon Anita before firing low past Vermeer.

Ajax almost produced an immediate response when Da Silva lost possession and Ozbiliz shot just over, a lapse in concentration that prompted Ferguson to berate his Brazilian defender.

However, United swiftly regained control and wrapped up the first leg when Hernandez exchanged passes with Rooney before finding the net via Vermeer.

Christian Eriksen showed throughout why many of Europe's biggest clubs are reportedly chasing him, while Ismail Aissati drew a diving save from De Gea at the death, but United were worthy winners.