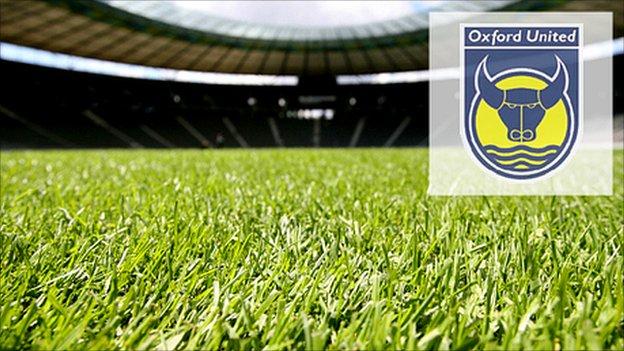 United need cover after losing forwards Tom Craddock, Alfie Potter and now Jon-Paul Pittman to injury and have completed a deal for the 26-year-old.

Kerrouche has made 18 appearances for Swindon this season, scoring eight goals, but has fallen out of favour with Robins boss Paolo di Canio.

"This is a good opportunity for me to play," Kerrouche told BBC Radio Oxford.

But he will not be allowed to play in the derby match on 3 March.

The move, which was made possible by fans group the 12th Man, follows Oxford striker James Constable rejecting a move to Swindon last month.

Kerrouche is French-born and of Algerian descent and signed for Swindon in July 2011.

"We are delighted that Medhi is joining us for a month at least," said U's boss Chris Wilder.

"At the moment we have eight games in the next month and are pleased to have been able to bring in a striker who has scored goals wherever he has been, and especially in this league already this season."

Kerrouche added: "I am very happy. Oxford are an ambitious club and I want to help the team achieve their objective.

"I am 26-years-old and I don't want to spend my time sitting on the bench. Now I just want to play my football and score some goals."

The striker admitted he knew about the rivalry between the two clubs but vowed not to let that affect him.

"I know Oxford are a rival club, but it was not me who made the decision to leave Swindon," he said.

"Now Oxford are my club and this is an opportunity to show I am good player. I have to work hard and prove to the coach I can help the team and I will try every day to do that."

Wilder has revealed he will now be without Pittman for four weeks because of a hamstring injury in a further blow to the U's.

At the weekend, Potter was ruled out for the rest of the season due to an ankle injury, while Craddock will be absent for two to three weeks with a hamstring problem.

"It's a blow with JP [Pittman] because he had done very well since he came back into the side," added Wilder.