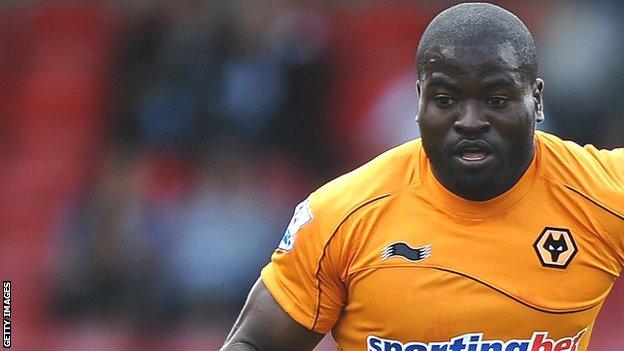 Nottingham Forest have signed Wolves left-back George Elokobi on loan until the end of the season.

The 26-year-old Cameroonian has made only 12 appearances for the Molineux club this season, with just three starts in the Premier League.

Elokobi told BBC Radio Nottingham: "It hasn't worked out for me this season.

"I was glad to come and play, to get some football under my belt and also to help Nottingham Forest out in the position they find themselves in."

Meanwhile, Elokobi leaves behind Wolves' battle to stay in the top flight for his new club's attempts to avoid relegation from the Championship.

He joins a side six points adrift of safety in the second tier and without a win in five league and cup matches.

"There's plenty of games to be played, there's nothing to fear, nothing to be scared of at the moment," Elokobi added.

"The only thing we can do as players is stick together and as a club, and I'm sure the fans will stick together with the players. Results are hopefully going to improve."