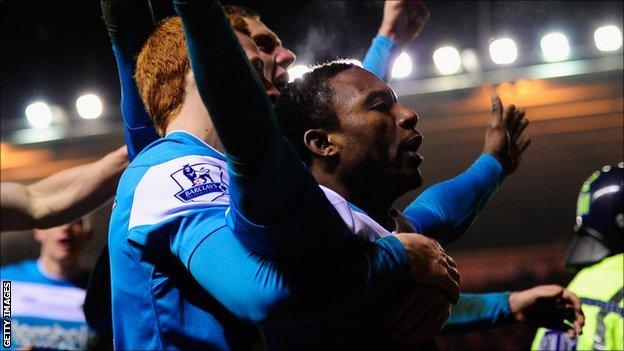 Sunderland manager Martin O'Neill admitted he could not see his side scoring before Stephane Sessegnon's late winner against Middlesbrough.

The Benin international's extra-time strike ensured progress to the FA Cup fifth round and the visit of Arsenal to Wearside a week on Saturday.

"I thought it looked as if we weren't going to get a goal and then Sessegnon pops up," O'Neill told BBC Newcastle.

"I'm delighted because penalty kicks would probably have been a lottery."

Coincidentally it is Arsene Wenger's Gunners - their cup opponents - who travel to the Stadium of Light on Saturday in the Premier League.

Three second-half goals at home to Aston Villa sealed Arsenal's place in the draw at the first attempt, avoiding the prospect of a replay going into the meeting on Wearside.

"I think that would be a major advantage to them," the Black Cats boss added.

"Generally speaking, Arsenal are still involved in a lot of competitions at this time of year and you would think they would be the ones playing midweek.

"But they've got the midweek off and they're absolutely buzzing after that big victory they had at the weekend.

"Having said this, we'll try to get ourselves together and prepare ourselves as best we can for the weekend game."

Meanwhile for Middlesbrough, the focus now turns to the Championship promotion bid with the Teessiders lodged in the play-off places.

Lukas Jutkiewicz gave Tony Mowbray's side hope with a second-half equaliser, and competed with their north east rivals until late in extra-time.

"It's disappointing, it's little consolation because we're out of the cup, we've had to play extra-time which is energy sapping," Mowbray told BBC Tees.

"Again, at the end of the game if the reward had been a cup tie against Arsenal we'll have been sitting here thinking it was all worth it, but what's important is the next game.

"We've had to play an extra 30 minutes at such intensity, we've got to go to Ipswich on a coach for five hours and try to perform again.

"If it isn't a performance of intensity and energy [at Ipswich] we'll know why."