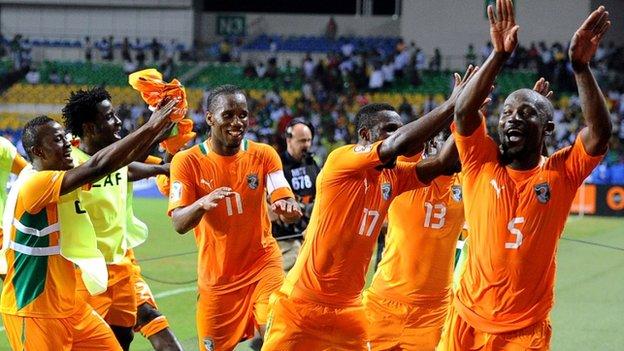 Ivory Coast say they have learnt from "mistakes" and will not underestimate Zambia in Sunday's Africa Cup of Nations final.

The pre-tournament favourites beat Mali 1-0 in Wednesday's semi-final in Libreville to make it to the showpeice event for the first time since 2006.

And Ivorian stars Kolo Toure and Salomon Kalou admit that it has not been an easy passage to the final.

"We are really happy, but now there is another game against Zambia.

The spirit I have, the spirit we all have, is to fight together as a team

"They are a really good team and it's going to be a very tough game.

"It means a lot to our country. The people there have been suffering so much.

"The only thing that brings them together is the national team and we try to do as well as we can."

Toure also believes his team-mates will be able to cope with the pressure of being huge favourites against Zambia.

"We are used to that pressure. We've learnt from all the mistakes we've made in the past, this has been helping us.

"On Sunday we need to prove we have the experience and that all the bad times we've had make us improve. That's the most important thing."

Kalou, meanwhile, paid tribute to Gervinho, who scored the winner against Mali after an impressive run from the halfway line.

"It was a great goal, a solo goal, finished with a classic inside foot," Kalou said.

"We've been working hard the last 18 months to get to that level.

"It's a moment we want to enjoy. Then we have to focus again for the final on Sunday.

"It's going to be a very difficult game. We are 90 minutes from our goal and I think that's not a chance to miss.

"The spirit I have, the spirit we all have, is to fight together as a team."

Kalou added that a change in their tactics, introduced by head coach Francois Zahoui, has played a big part in their success.

"We are more organised, we are not conceding goals, that's the basis of football," he said.

"With the strikers we have, we can score at any moment so the most important thing is to organise ourselves and then we know Gervinho, Didier Drogba, Yaya Toure or myself can make the difference."

The Elephants will be seeking to win the Cup of Nations trophy for the first time in 20 years against the Chipolopolo on Sunday.

Their only previous triumph came when they beat Ghana in the final in 1992.