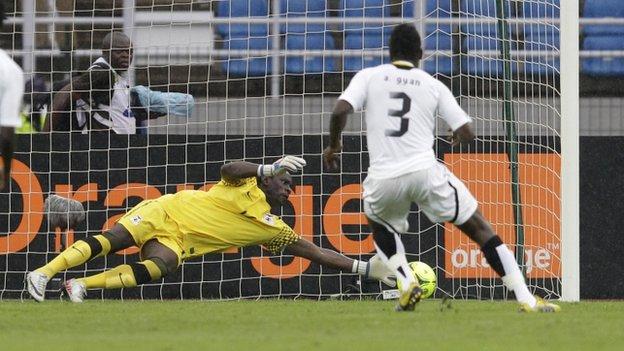 Ghana have rallied to support team-mate Asamoah Gyan, after his penalty miss against Zambia in the Africa Cup of Nations semi-final.

The striker missed a vital spot-kick in the last-four tie, before Emmanuel Mayuka put the Chipolopolo into the final with the game's only goal.

Ghana captain John Mensah said he spoke to the Al-Ain forward afterwards to console him.

"We all know that it can happen to anyone to miss a penalty," Mensah said.

"We just keep on encouraging him.

"I told him to concentrate on our next match [Saturday's third place play-off with Mali in Malabo]."

It's almost always the best players who miss penalties

Ghana enjoyed much of the possession throughout the last-four tie, and their best opportunity came in the first-half, when they were awarded the penalty for a foul on Kwadwo Asamoah by Zambian defender Davies Nkausu.

Gyan's tame effort from the spot was saved by Zambia keeper Kennedy Mweene, who dived to his left and palmed the ball away to safety.

It followed the former Sunderland striker's missed penalty in Ghana's World Cup quarter-final against Uruguay in South Africa in 2010.

Mensah said the mood in the Ghana camp was one of sadness, after failing in their latest attempt to end a 30-year wait for a Nations Cup trophy.

"It's tough to think of playing for third place, first we have to digest this game.

"We all wanted to make it to the final and win the title.

"Everyone is very sad, but I have to pick the players up and prepare for Saturday."

The Black Stars face a Mali side, who, despite being beaten 1-0 by Ivory Coast in their semi-final, say they are proud of their achievement in reaching the last four.

"I'm happy, because I'm here today, because we were in the semi-final, and I'm going to try hard to get third place," said Mali defender Ousmane Berthe.

"It's very good for Mali to be here, because Mali players are not big names.

"Ivory Coast have big [name] players, but Mali's players are young and played very well [against the Ivorians]."

The Elephants will meet Zambia in the final on Sunday in the Gabonese capital.