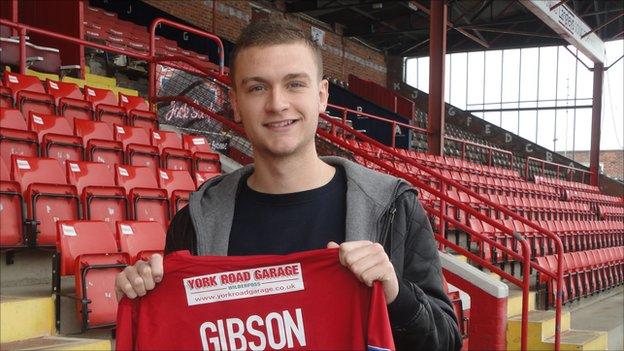 York City have signed centre-half Ben Gibson on loan from Middlesbrough until the end of the season.

The 19-year old came through the academy system at Boro and spent time on loan in League Two at Plymouth earlier this season.

Manager Gary Mills BBC Radio York: "He's a player I tried to get before the deadline.

"For me it's just made us stronger in that area again and means more competition for the other players."

Gibson won honours at England Under-17 and Under-18 levels and he was part of the England team that won the UEFA European Under-17 Football Championships in 2010.

His desire is fantastic and he's a winner

"He's a man. He's been down to Plymouth and played there for three months at the start of the season going into a club that is not the best to go into but he's gone down there and done well.

"I like his attitude. He's a talker for a young player. His desire is fantastic and he's a winner."

Gibson told the club's official website: "I'm looking forward to it and I'm excited. It's a chance to play in a team that's been doing well.

"I spoke to the manager and I know from a game against the reserves a couple of weeks ago that they play the way I like to play, they pass the ball and aren't afraid to get it from the back.

"It should be good experience for me and hopefully, while it will benefit me and my career, I'll be able to benefit York City and their promotion push."