Inspirational, obsessive, ruthless and thick skinned are words you normally associate with the art of management, but here is a new one for the coaching lexicon - nurturing.

It is one of the surprising adjectives Carlo Ancelotti's assistant coach Paul Clement uses to describe Paris Saint-Germain's new manager after the Italian had held court at PSG's Camp des Loges training centre for the British media earlier this week.

Clement had joined his boss at the briefing, perhaps also a chance for Steve Kean's former assistant at Blackburn to hear familiar English voices as he gets to grip with learning French. 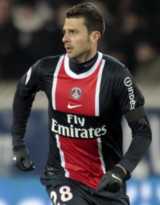 Ancelotti has been in Paris since late December, succeeding Antoine Kombouare who had led PSG to the top of the French league before the winter break, only to be sacked by PSG's general manager Leonardo.

So having talked of finding a Premier League club after his sacking by Chelsea at the end of last season, Ancelotti finds himself in Ligue 1, which even he admits is not as strong as the English and Spanish leagues.

So what made him join PSG and its fabulously wealthy Qatari owners Qatar Sports Investments (QSI)?

"In December I didn't have a really good offer from England and then I spoke to Leonardo and I found this club, PSG, are really very ambitious," Ancelotti told BBC Sport. "They want to build a strong team, an important team in Europe.

"I feel very good and I've found a fantastic club, where there is a lot of enthusiasm to build a strong club.

"The people involved in this club have a lot of enthusiasm and they really want to improve."

Leonardo has spent close to £100m in revamping the PSG squad but the Parisian club has been unable to attract a stellar name to the Parc des Princes.

"We had some problems because the French league is not at the level of Spain and England," said Ancelotti.

"We were able to buy Thiago Motta, Alex and Maxwell and, in the future, we will have more possibilities to buy new players."

PSG remain interested in Tevez and asked whether the Parisian club would try and sign him in the summer, Ancelotti replied: "Could be" - but the Italian suggested money might remain a stumbling block in any possible future negotiations.

"He is a fantastic player with a strong personality," said the PSG coach. "We spoke with his agent during the transfer window but we could not reach an agreement.

"I do not think he will change his idea about how much he wants to earn and I think he will ask the same in the summer that he was asking for in January."

Ancelotti might have only have been in charge of PSG for few weeks but he has already brought a new rigour and professionalism to the club according to the French journalists who regularly visit Camp des Loges, with training sessions conducted at a much greater intensity.

"He has a good way of dealing with people," said Clement. "He is very clear about what he wants to achieve tactically - both by talking to the players and by using video as well as in his half-time team talks.

"Whereas some managers might fly off the handle in training he is very nurturing."

Switching effortlessly between French, English and Italian, the urbane Ancelotti makes mentions of his liking for Parisian restaurants, but what is also striking is that he twice makes mention of a desire to manage again in the Premier League.

"Chelsea gave me the possibility to know about a new country and a new football and I have to say thanks," said Ancelotti. "Without that I wouldn't have known England and English football. I found a fantastic atmosphere and if you feel good in some place you deserve to come back."

They also gave him a whacking pay off with Chelsea revealing on Wednesday that it had cost them £28m to terminate the contracts of the Italian and his backroom staff, as well as subsequent compensation to Porto in hiring new manager Andre Villas-Boas.

"I knew when I signed if I didn't win I was sacked," said Ancelotti reflecting on his dismissal following the 1-0 loss to Everton on the last day of the season as Chelsea finished second in the Premier League behind Manchester United.