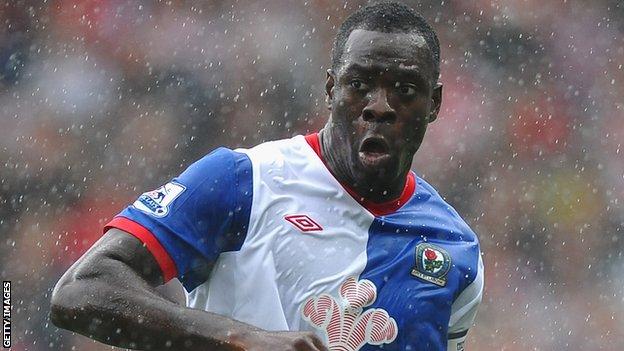 Blackburn manager Steve Kean expects wantaway captain Chris Samba to play for the club again although he is injured for Saturday's match with QPR.

The 27-year-old defender has not featured since handing in a transfer request in January, which was rejected.

The Congo international was critical of the club saying it was "not improving".

Kean said: "He trained really well on Monday, he's been around the place but what happened and what was said in the window he can put behind him."

Samba was due to play for the reserves on Tuesday but suffered a hamstring injury.

Kean says he has been encouraged by Samba's response since the transfer window closed.

"We want to get Chris back on the pitch and make sure he's in the proper physical state," he said.

"I can only take his enthusiasm and application in the sessions - that was excellent on Monday - and that's the last session he's had, unfortunately.

"After the session, Chris felt a sensation in his hamstring and was getting a bit of back pain so because of that injury he didn't manage to play in the game.

"He has been getting treatment on his hamstring and back ever since, so unfortunately he's not available.

"I'm sure once we can get this injury he's got cleared up he'll be back on the pitch with the reserves to get some minutes under his belt because we want to get him back as quickly as possible."

Samba was a target for QPR in January but Rovers turned down two bids for him, insisting he was not for sale.