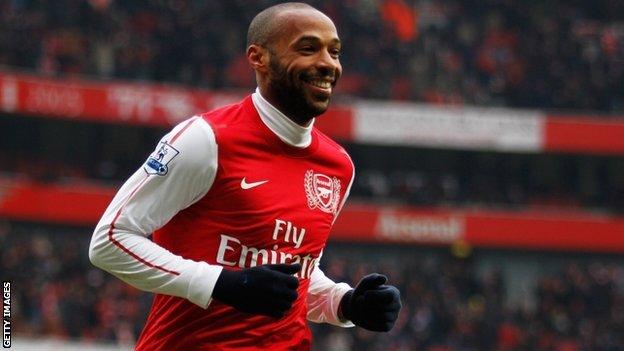 It means Henry will depart the Gunners six weeks after joining on loan.

Arsenal manager Wenger said: "I would have loved Thierry to stay for two more weeks but he has to go back. It's only fair on New York."

Henry will be available for Arsenal's trip to Sunderland on Saturday and the Champions League knockout tie against AC Milan on Wednesday.

The former captain will miss the FA Cup fifth-round tie with Sunderland on 18 February and the derby against Tottenham on 26 February.

"There will be no return [for Henry] in the derby," conceded Arsene Wenger.

"I would have loved him to have stayed two more weeks but he has to go back. He is captain of the Red Bulls. We accepted from the start that we would release him then so we respect our word."

Henry, Arsenal's record goalscorer, re-signed for Arsenal on 6 January, having trained with the club during the Major League Soccer off-season.

Since rejoining, he has scored two goals in five appearances, including the winner on his second 'debut' against Leeds.

The MLS season starts on 10 March, with the Red Bulls hosting Mexican side Pumas.

Wenger also revealed that he does not expect Russia captain Andrei Arshavin to leave the Gunners before the restart of the Russian season after the winter break.

"I expect him to be here after 24 February," clarified Wenger. "That is clear."