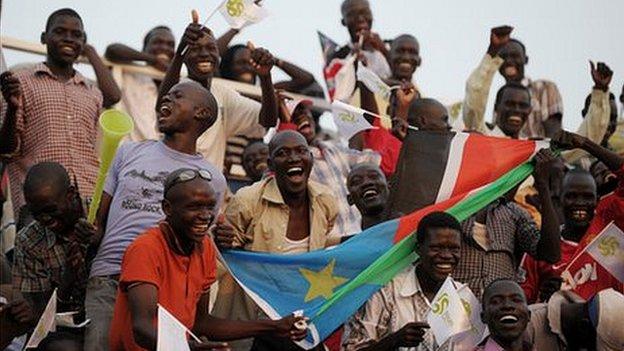 South Sudan has been admitted as a provisional member of the Confederation of African Football (Caf).

The move paves the way for it to become the world's newest footballing nation and the 54th member of Caf.

It was inaugurated in a flag-raising ceremony at the Caf Congress in Libreville, Gabon, on Friday.

The country, which was declared independent from Sudan last year, will need another two years before it can fully compete in all competitions.

"We are proud to have you as a member and now we would like to see you in our tournaments," Caf president Issa Hayatou said.

"We are delighted to have you."

Full membership of world governing body Fifa is expected to be granted in 2014, after which South Sudan can compete in qualifiers for the World Cup and Africa Cup of Nations.

A new South Sudan Football Association was established last month and a first election for leaders will be held in April.

In a friendly game organised as part of the independence day celebrations last July, a South Sudan side lost 3-1 to Kenyan side Tusker FC.