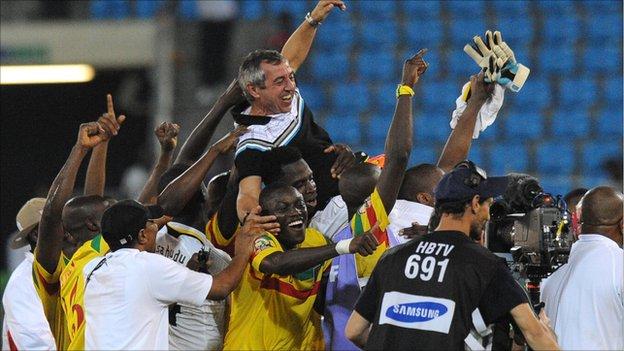 Mali finished third at an Africa Cup of Nations for the first time after beating Ghana 2-0 in Malabo.

The game turned when Ghanaian defender Isaac Vorsah was sent off for a second yellow card after 64 minutes.

Coach Alain Giresse danced on the pitch at the final whistle with his delighted players as the Eagles recorded their best Nations Cup result since 1972.

Forty years ago, they reached the final on their maiden appearance at the tournament, only to lose to eventual champions Congo.

Mali's victory in the Equatoguinean capital atoned for their 2-0 defeat at the hands of the Black Stars in the group stages, with Diabate saying afterwards that the players were keen to avenge the Franceville defeat.

Ghana coach Goran Stevanovic did not seem to share such a desire for victory as he started the game without a recognised striker, choosing to play brothers Andre and Jordan Ayew up front in an experimental system.

The Serb abandoned his scheme ten minutes before the break, as he brought on Prince Tagoe for Samuel Inkoom but by then some of the damage had already been done.

After a couple of long-range efforts from Ghana and the slightest half-chance for Mali, the Eagles opened the scoring midway through the first period as Diabate stabbed home from close range.

A corner routine found its way to Samba Diakite whose low strike from the edge of a crowded penalty area was spilled by Black Stars goalkeeper Adam Kwarasey, leaving the Bordeaux striker with the easiest of chances.

Samba Diakite tested Kwarasey shortly afterwards from a tight angle, but that was the last meaningful first-half action for the 6,000-odd fans who had come to watch the last Nations Cup match in Equatorial Guinea.

Early in the second period, Ghanaian substitute Sulley Muntari thought he had brought his side level when volleying home Vorsah's knockdown but the goal was ruled out for offside in a tight decision.

Vorsah's elation soon turned to despair as he became the third Black Star to be sent off at these finals after earning a second yellow card for his foul on Garra Dembele.

After Diabate threatened from a Seydou Keita free-kick, Ghana enjoyed a rare sight of goal as centre-back Jonathan Mensah curled a fine effort from the D past the post.

But the lanky Diabate soon wrapped up the points after left-back Adama Tamboura was set free down the flanks before delivering an inch-perfect cross which was tapped home for a decisive two-goal lead.

The Malian became one of seven players on three goals at the finals, but his hopes of finishing joint-top scorer will end if Didier Drogba, Chris Katongo or Emmanuel Mayuka score in Sunday's final.

Late on, Andre Ayew should have reduced the deficit but volleyed well wide from a fine position before his brother Jordan hit the corner of post and crossbar with a well-struck volley.

It was too little too late as Mali finally ended a run of three third-place defeats, to spark beaming smiles from the players who carried Frenchman Giresse on top of their shoulders in celebration.