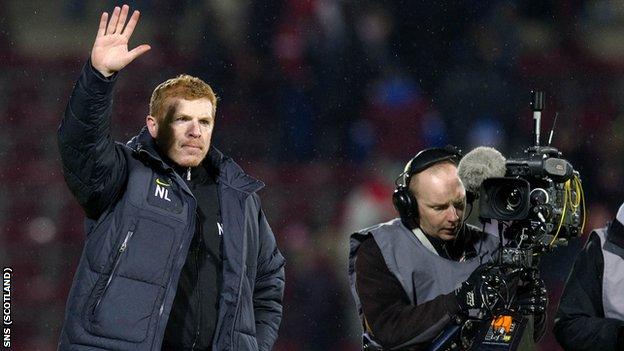 Neil Lennon prepares for his 100th game as Celtic manager enjoying a four point lead in the Scottish Premier League and still in the hunt for both cups.

And, despite a few setbacks, he aims to celebrate many more landmark dates.

"It doesn't seem like 100 games - it seems like a lot more," he said. "We have crammed in so much. From some great highs to some very bad lows, but that is life at Celtic for you.

"I thoroughly enjoy the job and relish the challenges that lie ahead."

Since initially taking temporary charge after the sacking on Tony Mowbray in March 2010, the Northern Irishman has had more than his fair share of pressure to deal with, on and off the pitch.

Ultimately when you are in charge of one of the major Glasgow clubs, you are judged on silverware

Death threats and physical attacks were tough to deal with he admits, but he only ever contemplated walking away when his side slipped 15 points behind Rangers earlier this season.

"I have been able to keep a level mood through the bad spells and I'm the same now when things are going well," explained Lennon, who won the Scottish Cup last term.

"But you are only ever one game away from a crisis, so you are never really comfortable."

On the confirmation of his full-time appointment in June 2010, Lennon famously said that he wanted to "bring the thunder back" to Celtic Park.

"You would have to ask the supporters that," he replied when asked if he thought that aim had been achieved.

"There seems to be a general good feeling around the place, although that comes with results.

"Ultimately when you are in charge of one of the major Glasgow clubs, you are judged on silverware.

"That is our main aim this season, to bring more silverware to the club.

"So maybe at the end of the season, I can judge it then."