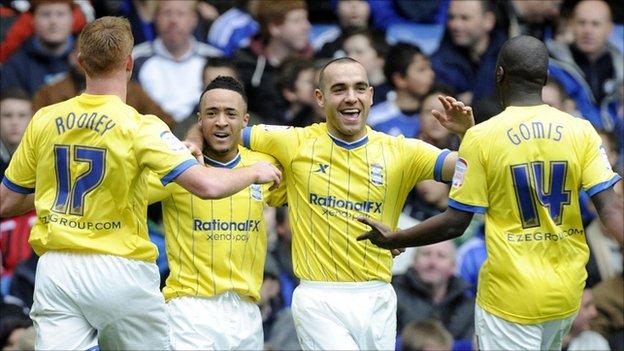 Daniel Sturridge's second-half header spared Chelsea a humiliating FA Cup fifth-round exit against Birmingham but did nothing to ease the pressure on Andre Villas-Boas.

The Chelsea manager cut a forlorn figure on the touchline as his lacklustre side left the Stamford Bridge pitch to a chorus of boos and chants of support for former manager Jose Mourinho.

Chelsea were woeful before the interval and the visitors deservedly led through David Murphy's close-range strike.

The hosts squandered a glorious chance to level when Juan Mata's penalty was well saved by Colin Doyle.

But the home side improved and earned a replay when Sturridge headed in Branislav Ivanovic's teasing cross.

Winless in four, already out of the Premier League title race and in serious danger of failing to qualify for the Champions League, Chelsea's season was already in the doldrums.

Desperately needing to make FA Cup progress before their season-defining European tie with Napoli on Tuesday was not the brave new world envisaged by owner Roman Abramovich at the start of the campaign.

Chelsea have not been beaten at home in the FA Cup by lower league opposition since losing to Oxford United in 1991.

But a convincing win - and equally convincing display - could have been the precursor to better times and provided a confidence-boosting platform.

The reality, against a spirited and superbly organised Birmingham, who are now unbeaten in 14 games, was very different.

The first half was far too typical of Chelsea in the past two months - slow to start, ponderous in midfield, sloppy in defence and only a threat in attack through the searing pace of Sturridge and inventiveness of Mata.

Birmingham made the most of the Premier League side's slow start to go ahead when Murphy netted after the defence dithered following a well-worked near-post corner.

But while the noisy away Blues contingent were still taunting the home support and suggesting that Villas-Boas would be "getting sacked in the morning", Chelsea had a wonderful chance to instantly draw level.

An incisive move on the edge of the box saw Ramires wriggle free only to be felled by Wade Elliott.

Mata, who had scored in both of Chelsea's FA Cup wins this season, opted to go low but his effort was not particularly well struck and was saved by the excellent Doyle.

Sturridge then had a decent claim for a second spot-kick and the home side began to dominate possession and create chances.

David Luiz had a 25-yard free-kick pushed way by Doyle, and Sturridge was within a whisker of levelling with a vicious, dipping volley from the edge of the box.

Chelsea were vastly improved after the interval, mainly thanks to a change in formation that saw Didier Drogba replace the anonymous Fernando Torres and John Mikel Obi sacrificed in favour of Salomon Kalou.

Up until then Birmingham's packed midfield had deprived Chelsea time and space with the tireless running of striker Adam Rooney particularly inspirational.

But the home side started to dominate possession, territory and chances.

Sturridge restored parity just after the hour when his beautifully guided header, from Ivanovic's cross, nestled in the far corner.

They then went close to taking the lead, with Mata shooting wide after a controlling a long ball forward and Raul Meireles firing in a shot that took a deflection before bouncing up and over the bar.

Redmond had Birmingham's only chances after the interval, shooting over following a clever corner routine and fluffing a wonderful late opportunity as he bore down on goal.

Chelsea pressed for a late winner but had to make do with a replay at St Andrew's on Tuesday, 6 March (1945 GMT).