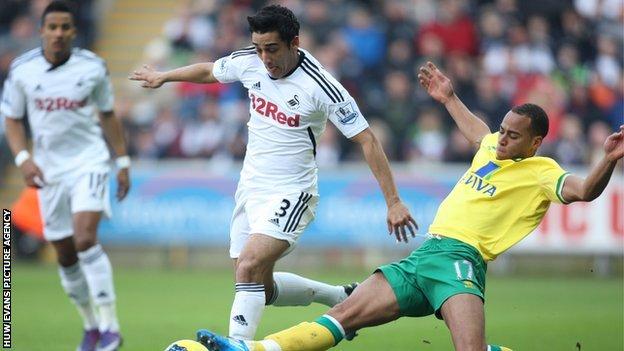 Norwich's second goal deflected off Taylor's foot, and the first hit team-mate Ashley Williams on its way in.

"It was one of those days where deflections go for the other team," said 23-year-old Taylor.

"Even then we still could have drawn the game. But it's only our second defeat at home this season so we've got to be proud of that record."

Norwich's first two goals came within four minutes of each other shortly after the break, swinging the momentum into their favour after Swansea's Danny Graham had opened the scoring.

Grant Holt struck first after the home defence switched off to allow Elliott Ward to cross into the six-yard box, and then Anthony Pilkington's shot wrong-footed home goalkeeper Michel Vorm after changing course as Taylor stretched out his leg in an attempted block.

Holt added a third shortly afterwards, capitalising on the space vacated by Taylor down Swansea's left flank as he pushed up in attack.

"The start of the second half we didn't come out quick enough," he said.

"They obviously had a couple of deflections for a couple of goals and third goal was when we were pushing to get a goal back."

Graham's opening goal on 23 minutes bore all the hallmarks of Swansea's intricate passing principles as Gylfi Sigurdsson and Nathan Dyer combined to free the striker.

Another flowing move, with Dyer once again instrumental, looked destined to end with a tap-in for Graham, but Ward raced back to nick the ball off his toe.

But those were the highlights for the home side as they failed to impose their usual dominance of possession.

"We weren't as good as we normally are with the ball and we'll take our medicine and move on," conceded manager Brendan Rodgers.

Norwich joined leaders Manchester United in being the only teams to leave the Liberty Stadium with three points this season and Taylor said the result would not cause any major alarms.

"We've done well so far," said the Wales international. "We can't let [this result] get us down too much.

"I think it was a blip. Even though we didn't perform to our best we still could have got a point from the game. We'll work again defensively because we want to get back to those clean sheets."

Swansea almost completed an unlikely comeback after Graham's late penalty gave the home side a glimmer of hope.

"We found ourselves 3-1 down in a game we shouldn't be," added Rodgers.

"But the comeback was fantastic - we just couldn't quite get that finishing goal that we deserved. It's a disappointment."