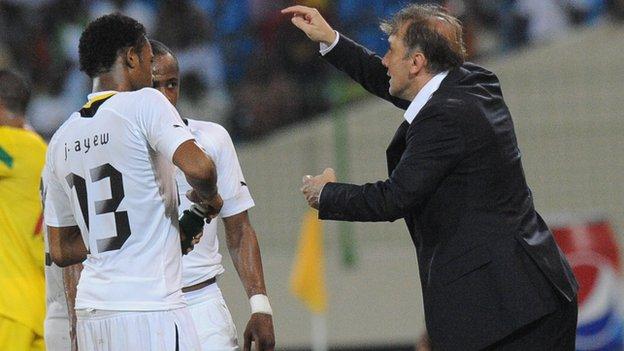 Ghana coach Goran Stevanovic has questioned his side's discipline, admitting he may not "know [his] players very well".

The Black Stars - who finished fourth at the Africa Cup of Nations - saw captain John Mensah suspended after being sent off in their opening game.

They were also without Derek Boateng and John Boye for their 2-0 third place play-off defeat to Mali.

"I don't know why in every game we had one sending off," Stevanovic said.

"We finished in fourth position, but it's very strange that we always play with one player less.

Ghana also went into the competition with defender Isaac Vorsah suspended for the first two games and saw several players struggle for fitness.

Mensah's return to the team after serving his suspension was hampered by injury and striker Asamoah Gyan struggled to shake off a pre-tournament hamstring strain.

"During the competition we had a lot of problems with injury, with red cards, two yellows for John Boye, maybe this is the problem," Stevanovic told BBC Sport.

The Serbian coach said he would leave the decision on his future to the Ghana Football Association (GFA), but admitted that Black Stars fans would not have been happy to see Ghana finish fourth in Equatorial Guinea and Gabon.

"We need to make an analysis, calmly. I leave everything in the hands of the GFA.

"I have more time on my contract. I feel good here and I want to continue, because we're building a strong team for the future.

"I know how Ghana played before, and I know how we play now."

Stevanovic was appointed in January of last year and promised, after taking the job, that he would deliver Ghana's first Nations Cup trophy since 1982.

The former Partizan Belgrade boss has a year to run on his contract, which is due to take him up to the 2013 Nations Cup in South Africa.