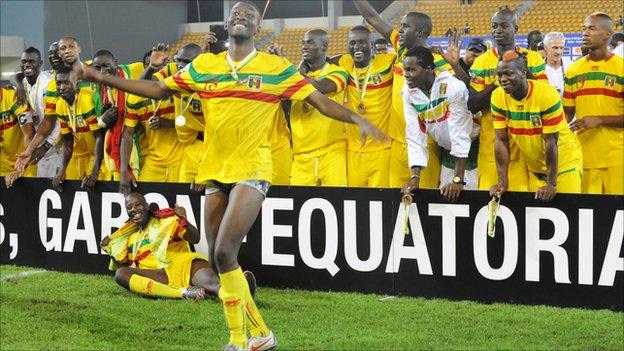 Cedric Kante says he is honoured to have been captain of Mali as the Eagles recorded their best Africa Cup of Nations finish in 40 years.

The West Africans beat regional rivals Ghana 2-0 on Saturday to take third place at the finals for the first time.

"It's a great honour, as a captain and a Malian player, to finish third - a very great feeling," said Kante.

"When we started this competition, we came to play as well as possible but we didn't expect results like this."

If we keep this spirit, I think we can go far and we can be optimistic

"I am more than happy (and) more than satisfied."

Prior to the competition, most Malian fans had low expectations because of the combination of big-name absentees, a handful of injuries and the introduction of several youngsters.

However, a 1-0 win over Guinea in Mali's opening game propelled the Eagles into the knock-out stages from Group D, where they were beaten by Ghana before sinking Botswana.

In the quarter-finals, coach Alain Giresse's side took on co-hosts Gabon and triumphed via a penalty shoot-out after the game finished 1-1 after extra-time.

The Eagles were trailing in Libreville before finding an equaliser with just six minutes left - an incident that reflected the Malians' character at these finals, says Kante.

"The spirit is here, we have the quality, we are young and I think we can improve in the next couple of years," the centre-back told BBC Sport.

"We have been building the spirit we showed in this competition for two years now - it is not a new thing."

The Panathinaikos defender also paid tribute to Giresse, saying the Frenchman's role in rebuilding the Eagles has been crucial.

"If you see the work Giresse (and his coaching staff) did over the last two years, it's fantastic," said one of the defenders of the tournament.

"With his experience, not to mention the great player he was in the past, the coach is very helpful for us and for Malian football as we have many things to learn from him."

Mali's attention will now turn towards qualifying for next year's Nations Cup and the 2014 World Cup qualifiers, which get under way in June.

Despite the Eagles' success in Equatorial Guinea and Gabon, Kante is refusing to believe that his side will cruise to Brazil 2014.

"If we keep this spirit, I think we can go far and we can be optimistic," he explained. "But to go to the World Cup is (not like qualifying for the) African Cup.

"There are only five teams who qualify - and with Cameroon, Nigeria and all these teams who are better than us normally, we have to prove that we can beat those teams.

"First, we have to beat Benin and Algeria and we'll see if we can keep the spirit but I hope so."

Rwanda are the fourth and final team to make up Group H of African qualifying for the 2014 World Cup - with the 10 group winners meeting in a play-off in late 2013.