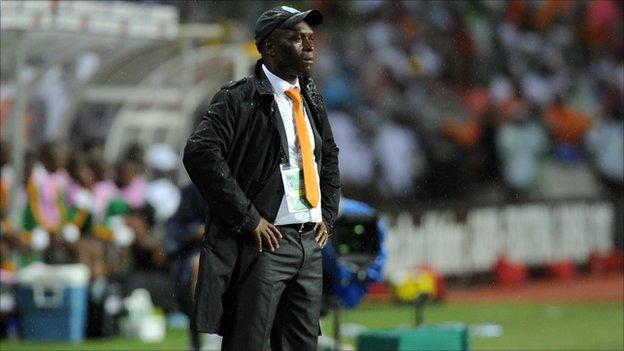 The Elephants missed a penalty in regulation time before losing the shoot-out to Zambia after the final had ended goalless despite extra-time.

"We didn't expect such a challenging final," said the Ivorian.

"We go back to Abidjan with not too much shame. I think we played a good game. I congratulate Zambia."

The Ivorians' misery was compounded by knowing that they had gone through the entire tournament without conceding a goal.

"It's difficult when you take part in a competition and you don't concede any goals and score nine goals,'' Zahoui said.

We have a lot of disappointment, but we're not going to be moving players [out] because of that [defeat]

"You feel the cup is within your reach. We'll take stock of this later on.''

The Elephants did have chances afterwards, most notably when Max Gradel dragged a shot inches wide in the dying moments of regulation time.

In the shoot-out, English Premier League stars Kolo Toure and Gervinho both missed their spot-kicks to allow the Zambians to take their first title after winning 8-7 on penalties.

"We didn't have much luck," said Zahoui, who was looking to win only the Elephants' second title - and first since 1992.

"We missed the penalty in normal time, then perhaps lost a bit of confidence.

"This is a big disappointment for us."

Zahoui also said that any decision on the future of some of his team members - with Drogba now 33 and Kolo Toure 30 - would be taken after his return to Abidjan.

"We have a lot of disappointment, but we're not going to be moving players [out] because of that [defeat].

"We'll have to see what has to be done. If we have to change some players, we'll see."