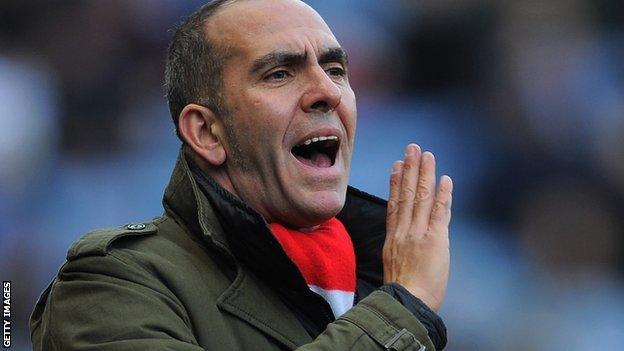 Swindon Town manager Paolo di Canio believes his side are a 'thousand miles ahead' of arch-rivals Oxford United in the promotion chase.

"I think we are a much better side than them and are a thousand miles ahead," Di Canio told BBC Wiltshire.

"They can compete for the play-offs but we are much better, I am not worried."

This is not the first time Di Canio has stoked the rivalry between the two clubs. Before their first league meeting of the season in August, the Italian claimed the U's star striker James Constable was a Swindon fan.

Oxford went on to win 2-1 at the County Ground - Constable scoring both goals - and the sold-out return leg at the Kassam Stadium will be played on 3 March.

Swindon recently loaned out of favour forward Mehdi Kerrouche to their bitter rivals, and Di Canio says he is not expecting the Algerian to make an impact on their promotion push.

"I let him go because maybe he could make a difference to them," added Di Canio. "He's a talented player with good technical quality but I don't see that in one month he can give them 25 points.

"I don't mind if they become stronger. They might go up through the play-offs but there are many clubs around them.

"We will see if he plays and if he has a part. If he's happy and Oxford are happy and they want to buy him we can see.

"But it is clear at the moment that in the way I want to play, it is difficult for him to even have a chance on the bench. It's better for him to find a place where he can play football."