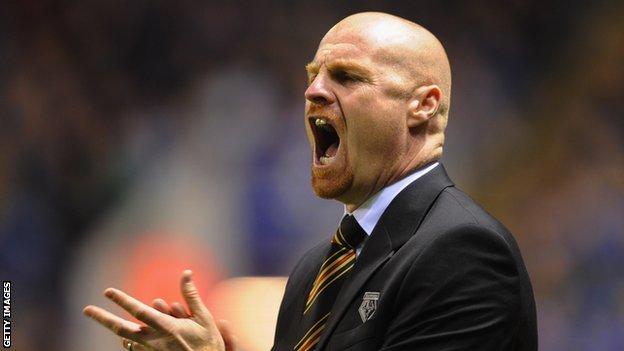 Watford boss Sean Dyche says his side's focus is on moving towards the play-offs, rather than concentrating on securing Championship safety.

Saturday's 1-1 draw at Nottingham Forest moved the Hornets to within 12 points of the top six - and 12 points clear of the bottom four.

"It keeps that gap where you might have a little chase for something," Dyche told BBC Three Counties Radio.

"We certainly look upwards. We've tried to do that that all season."

He added: "It's not easy to do that at times because we've had a lot of challenges at this club with players leaving etcetera.

"But the mentality of my players and staff is fantastic. We can get better. We're still looking to perform better each week and we do demand a lot of our players and expect a lot."

Watford were not at their best at the City Ground, but managed to secure a point through Troy Deeney's first-half equaliser.

"We're building towards playing well as often as we can and some days it just doesn't happen," admitted Dyche.

"But to grow that resolve and belief in each other to defend like we did at times, that's a really powerful thing."

And the Hornets manager will look to strengthen his squad with a loan signing this week, after losing striker Marvin Sordell to Bolton on transfer deadline day.

"I've suggested many times - right player, right time, right situation, right finances. It all has to come together," he said.

"We are active. It's just making the right ones drop."