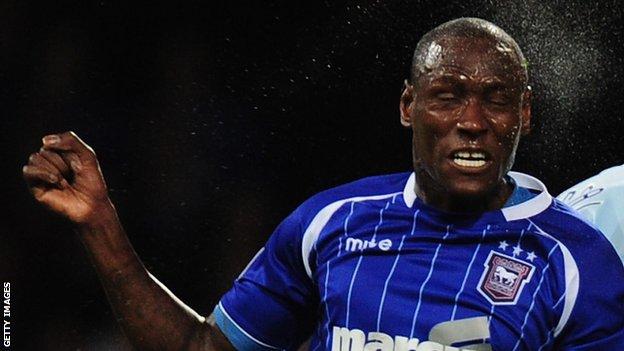 Ipswich Town will be without defender Ibrahima Sonko for up to four weeks with a dislocated rib.

The 31-year-old Senegalese was replaced 32 minutes into Saturday's abandoned fixture with Middlesbrough.

He hurt himself after falling onto the pitch and referee Dean Whitestone called off the game five minutes later after deciding the surface was unsafe .

"I would imagine it will be between two and four weeks," boss Paul Jewell told BBC Radio Suffolk.

"It's a blow. Every time we go on a good run one of our centre-halves seems to get injured."

And the Ipswich manager will step up his efforts to make a loan signing.

"It's in an area that leaves us really short and we are trying to improve that area," he said.

But midfielder Lee Bowyer is moving closer to a return from the groin injury that has sidelined him since January.

"He did a full week's training last week," said Jewell. "We could do with getting him a game somewhere, an 11-against-11. But he's not far away."