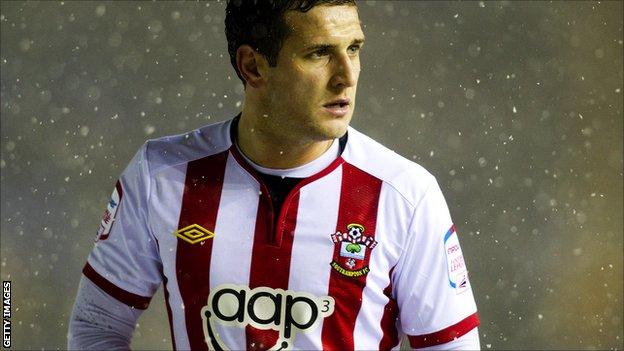 Southampton striker Billy Sharp says the pressure will be all on West Ham in Tuesday's top-of-the-table clash.

The Championship leaders host Saints at Upton Park with just one point separating the two sides.

However, new signing Sharp believes Saints can go to East London with the pressure off and come away with a positive result.

"It's a top-two clash and the pressure is all on them really," Sharp told BBC Radio Solent.

Sharp, 25, scored on his home debut in the 2-0 victory over Burnley on Saturday and the former Doncaster Rovers man says he is relishing Tuesday's clash.

It's always nice to compete with the best out there

"We can go there and be positive, their fans will be expecting them to win," he said.

"But we believe we can go there and get the three points and go above them."

Saints defeated the Hammers earlier in the season courtesy of Jos Hooiveld's header and the big Dutch defender made his return from injury on Saturday.

"They are a very strong side and very physical," he told BBC Radio Solent.

"They have bought a couple of new players in the January window but that can make the camp restless and we have to benefit from that.

He added: "It's always nice to compete with the best out there."