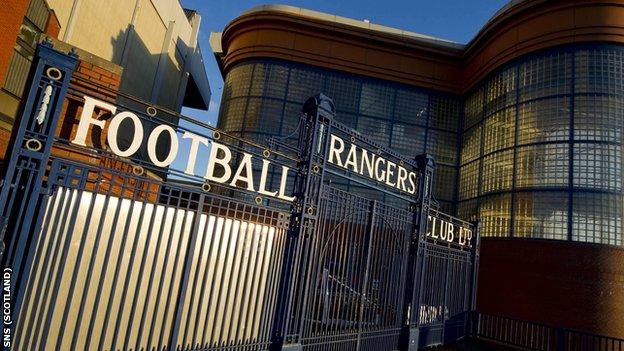 Now that Rangers are heading for administration, what does this mean for them in a football sense?

Firstly, they will be deducted 10 points by the Scottish Premier League. That is a standard punishment for any SPL club suffering an "insolvency event" as covered by the league's rules. They state: "Where the Insolvency Event occurs during the season, the points deduction shall apply immediately." That will leave Rangers on 51 points, 14 points behind the SPL leaders Celtic.

Will they be able to play against Kilmarnock on Saturday?

There is no reason why they wouldn't be able to fulfil the fixture, unless the administrator appointed disposed of such a large percentage of the playing staff that a team could not be put together. That scenario is extremely unlikely.

What happens to the players?

That is very much down to the administrator. When a club enters administration, there is a moratorium on the debt to allow the club the chance to continue. Players' contracts are still valid and will continue to be honoured if the administrator decides the club can afford to do so.

There may be some redundancies if the administrator decides there is not enough cashflow to pay everyone, but it is often preferable to retain the club's top players if possible, if only to sell them on in the next transfer window.

Players may be asked to take a wage cut or, if players are made redundant, they may be offered a settlement. If that is deemed unacceptable they become another of the club's creditors.

What about assets like Ibrox Stadium and the club's training facility at Murray Park - could they be sold?

All of the club's assets revert to the administrator, whose aim is to exit administration by satisfying creditors. As such, the administrator must decide how best to raise the money required to do that, for example selling players or, indeed, fixed assets.

By that rationale, Ibrox and Murray Park could be sold, though the sale of the stadium is more problematic because of the listed building status of the main stand there. Glasgow planning regulations are said to prohibit the training complex being sold for residential development, making the land less attractive to developers.

Can Rangers continue as the same club, with the same history?

Yes, as has been the case with previous clubs who have gone into administration. But it is not always the case. In the example of Airdrie, for instance, the club went out of business, then bought over the registration of Clydebank, who were themselves in administration, and formed Airdrie United, a completely different entity.

When has this happened before in the SPL and what were the consequences?

Four clubs have gone into administration since the SPL was formed in 1998. The first of those was Motherwell in April 2002. They avoided a points penalty, as no such punitive rule existed at that time, but 19 players were released or made redundant.

Dundee also avoided a 10-point deduction, having entered administration in 2004 with debts of around £20m, resulting in 25 staff losing their jobs. They had begun the process of coming out of administration in time to miss the points penalty.

The scenario was the same for Livingston, who had seven players made redundant. But in 2008, Gretna were docked 10 points and ultimately went out of business following the withdrawal of funding by their owner Brooks Mileson.

If Rangers qualify for Europe next season, will they be allowed to play in European competition?

That depends. If they come out of administration as the same entity, their licence to compete in Uefa competitions would be issued by the Scottish Football Association, provided they had exited administration by the end of March.

Failure to exit administration by then would mean they would not have a licence and wouldn't be able to compete in Europe next season.

If they come out of administration as a different entity, their license would lapse and they would have to apply for a new one. It would then be up to the SFA and Uefa to decide if a new licence can be granted.