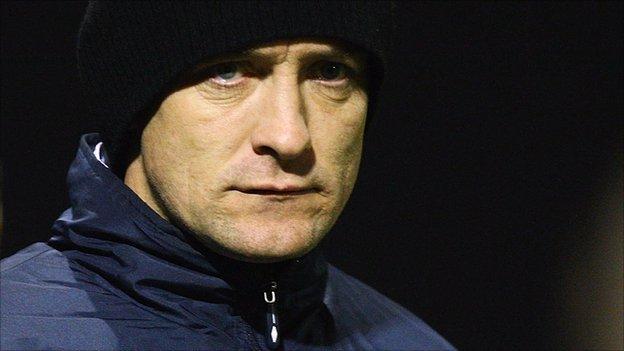 Barrow manager Dave Bayliss insists the departure of former joint-boss Darren Sheridan will not affect his position at the football club.

Sheridan ended a four and a half year association with the Bluebirds as player and co-manager when he left the club by mutual consent last weekend.

"I love my job, I put everything into this job, my role won't change," Bayliss told BBC Radio Cumbria.

"I work extremely hard here, I love this club and I'm going nowhere."

Bayliss continued: "I want to be here for a long, long time."

Under the combined stewardship of Bayliss and Sheridan, Barrow won promotion into the Blue Square Bet Premier, reached the FA Cup third round on two occasions and capped those achievements with an FA Trophy success at Wembley in 2010.

The subsequent departure of the former Barnsley and Oldham midfielder means Bayliss, whose playing days took in spells at Luton, Rochdale and Wrexham, is in sole control of the club for the first time in his managerial career.

"I don't want an assistant manager at this moment in time," Bayliss added.

"Gavin Skelton will take a more active role in training, he'll do a lot more sessions, like he did last week and those sessions were excellent.

"The lads respect Gavin, he's a senior player, but I don't want him to forget his duties, so come matchday I want him to focus on playing games and [former player] Robin Hulbert will come into help.

"I don't want an outsider in, because I don't want them to influence what we've already got - a good bunch of lads - and we'll work from within.

"It's a good opportunity to Gavin and Robin to show us what they've got."