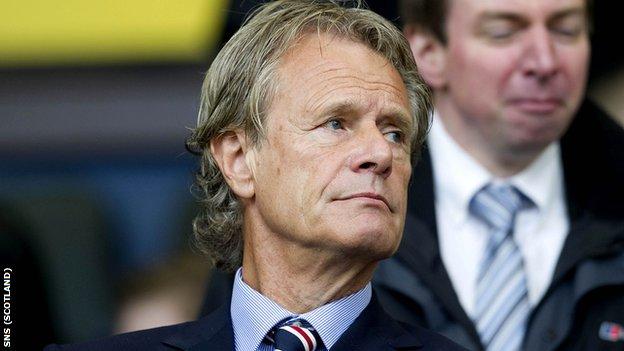 In an interview with BBC Scotland, Johnston, part of the previous Ibrox hierarchy, queried Whyte's strategy.

He said: "Mr Whyte went in to this circumstance [buying the club] knowing full well the ramifications of the tax [case] but chose to do it anyway.

"What do you know now, Mr Whyte, that you did not know before you bought it?"

Rangers filed legal papers at the Court of Session on Monday to appoint administrators before its tax dispute with HMRC has been decided upon.

The reigning Scottish Premier League champions has 10 days to decide if it should appoint administrators to run the club, at which point it would be deducted 10 points from its league tally.

In a statement on the club's website, Whyte said: "What is of paramount importance is the long-term security, survival and prosperity of this great football club."

But he insisted that Rangers would emerge from the turmoil "fitter and stronger".

Johnston chaired the independent board committee, created by Rangers to assess potential buyers of the club from Sir David Murray, who was keen to sell after more than 20 years at the helm and whose Murray International business empire was feeling the effects of the recession.

"We were somewhat entitled to the view that who carried the coffin to the graveyard, if you will, was going to be important with respect to how they might benefit from that scenario," Johnston told Sportsound.

"For whatever else he [Whyte] is, his expertise is in distressed companies and making them survive, or not survive, to his benefit.

"We were entitled to take the view that administration would be on his agenda and that he would be the principal beneficiary of such a process.

"What I would say [to Whyte] is, 'what is it you missed in due diligence that would have indicated that you are in situation that you did not anticipate?'

"'And what is it that you have or have not done that may or may not have made a difference under your stewardship?'

"The bottom line is that he spent a vast amount of time studying this tax case, a lot more than he did on operating issues like cash flow.

"He had a wealth of advice on the tax case, so only he knows what his agenda was at that point in time."

Johnston was the club chairman when Whyte bought out Murray for £1 and cleared the £18m debt owed to Lloyds Bank.

And he bristled at comments by Whyte that the previous regime did not "step up to the plate" and that it "not only failed to prevent Rangers being engulfed by our current problems but chose not to invest their money to help put it right".

Johnston responded: "The Rangers board had alternatives that they were working on which both the bank and Murray International did not like.

"I have all the files, all the presentations I made to the bank and I will one day produce them. The amount of money that Rangers was about 3% of the total debt that Lloyds had with Murray International.

"All we wanted them to do was to migrate that debt into the Murray balance sheet. Why the bank wouldn't do that, to avoid all the negative publicity, I still don't know.

"When Craig Whyte came along, these discussions were put on hold until we figured out whether Craig Whyte was for real.

"The bank didn't believe it at first and then, when they saw the £18m coming and they realised it was a better way of getting out of it, they forced it through.

"The bottom line is that if Mr Whyte's deal had not transpired, that [the transfer of debt to Murray] was the agenda.

"It would have been a win-win situation for everybody involved.

"So for Mr Whyte to say we were not actively working on the long-term survivability of Rangers is a function of naivety."

Johnston's view is that Whyte's move at the Court of Session is to sound out the position of HMRC or Ticketus, the company that has loaned Rangers £24m in return for future season ticket revenue.

He said: "He is indicating that he is willing to help salvage the situation if HMRC come to the party. But we all know HMRC are not going to walk away with nothing.

"HMRC saw this coming. HMRC are not stupid. HMRC will certainly have been dealing on a confrontational basis with Mr Whyte, recognising that they know each other from previous experience.

The only outside entity that actually has a right of recourse if Mr Whyte defaulted on any of his commitments, is Murray

"I think he is sending a message out that he means business - who is going to blink first?

"While the events of today were predictable, it's still a shocking experience."

When asked for his opinion on how the club's predicament would affect Murray's legacy, Johnston replied: "It is seriously jeopardised, for sure."

But he revealed that under the terms of the sale of the club to Whyte, the steel magnate could, theoretically, return as club owner.

"One of the avenues that could be pursued - and I wouldn't suggest it with any degree of confidence because it will take substantive effort and money - is that, in the terms of the sales purchase agreement (SPA), the only outside entity that actually has a right of recourse if Mr Whyte defaulted on any of his commitments, is Murray.

"That won't be easy because the language [of the agreement] is a little fluid and flexible.

"But there is a suggestion that a lot of things could be unwound if Murray International chose to look at the SPA, take some action and and see how far they went.

"If David were to do that, I think it would help the perception of his legacy.

"In practice, it would be a long struggle.

"Keep in mind, there is no appetite from David to do this and, given his destiny over his wealth is still under the strong jurisdiction of Lloyds Bank, I can't imagine Lloyds saying, 'David, we'll allow you to get Rangers back'."