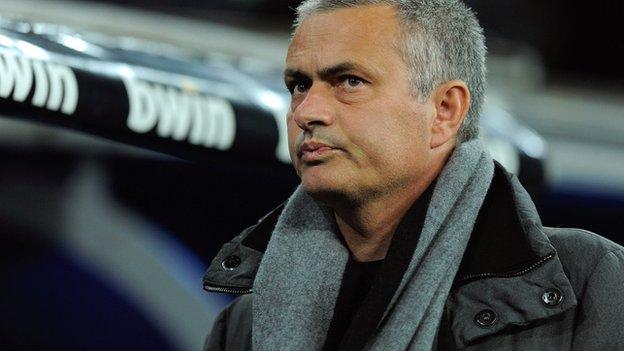 Andre Villas-Boas is unlikely to succeed at Chelsea while his players are still in contact with ex-Blues boss Jose Mourinho, says Porto's president.

"He needs time to mould his team," said Jorge Nuno Pinto da Costa, who employed Mourinho and Villas-Boas at Porto.

"He can't do that as long as there are players, as I've heard, who exchange text messages with Mourinho."

The 34-year-old described the 2-0 defeat at Goodison Park - Chelsea's fifth in the top flight this season - as "one of our worst displays - if not the worst".

It is reported that Sunday's heated exchange took place in front of Chelsea owner Roman Abramovich.

Pinto da Costa told La Gazzetta dello Sport: "He will be successful with Chelsea because his contract isn't just for one year.

"The only thing that will topple Villas-Boas is if he fails to qualify for the Champions League."

But he suggested that "Abramovich knows" about the text messages being exchanged between certain Chelsea players and now Real Madrid boss Mourinho.

"If he leaves Chelsea, he'll be the next coach of Inter," added Pinto da Costa.

He built strong relationships with the likes of John Terry, Frank Lampard, Didier Drogba and Petr Cech before he was sacked in 2007.

Villas-Boas, an assistant to Mourinho at Stamford Bridge and Inter Milan, was also given his break in management by Pinto da Costa.

He guided Porto to the 2010-11 Portuguese league and Europa League titles before succeeding Carlo Ancelotti at Chelsea last summer.