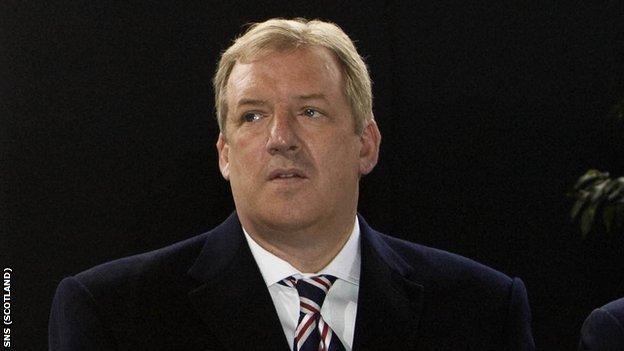 And Murray believes the club's tax case, which has prompted the dramatic development, "remains favourable".

He also confirmed that there is no legal mechanism for him to reacquire the Ibrox club.

Murray ended his 23-year reign at Rangers in May last year when he sold Craig Whyte his shareholding for £1 in return for assurances over investment.

And Murray said he believed the sale to Whyte's company presented the "best available path" for the club's future, while stressing that details of the tax case were fully disclosed in the due diligence process.

A statement from Murray read: "Words cannot express how hugely disappointed I am with news of today's appointment of administrators to The Rangers Football Club PLC (the Club).

"The timing of the appointment of administrators is especially surprising given two facts. Firstly, there has been no decision, and there is no present indication as to the timing of a decision, from the first-tier tax tribunal concerning the potential claim from HMRC of £36.5m excluding interest and penalties.

"Secondly, legal opinion on the strength of the club's case remains favourable.

"In addition, the share purchase agreement (SPA) imposed a number of obligations on Wavetower.

MIH is saddened by the appointment of administrators. It recognises the tax-tribunal proceedings have stemmed from arrangements put in place during the time of its ownership

"These included the retention of £9.5m on behalf of the club for investment in the playing squad, expenditure on the infrastructure of the stadium and settlement of an agreed tax liability, together with the availability of working capital to fund the club's operations.

"The Shareholder's Circular issued by Wavetower on 3 June 2011 confirmed these undertakings.

"Contrary to recent press speculation, there is no legal mechanism in the SPA for MIH to reacquire the Club.

"MIH wrote to Wavetower on 25 August 2011 seeking confirmation that its various obligations were being complied with.

"A confirmatory assurance was eventually obtained on 3 January 2012. Following recent speculation concerning the financing and security arrangements put in place by Wavetower, a request was issued seeking further clarity. At the time of this announcement, no response has been forthcoming.

"At the time of relinquishing control over the club, MIH endeavoured to ensure the future of the club through the various commitments and undertakings of Wavetower.

"In May 2011, the sale to Wavetower presented the best available path for the club's future and was reasonable given all the circumstances existing at the time. Contrary to numerous reports, there were also no viable alternative offers made in advance of the sale.

"MIH is saddened by the appointment of administrators. It recognises the tax-tribunal proceedings have stemmed from arrangements put in place during the time of its ownership.

"However, these arrangements and details of the proceedings were fully disclosed by the club to Wavetower and Craig Whyte in the due diligence process."