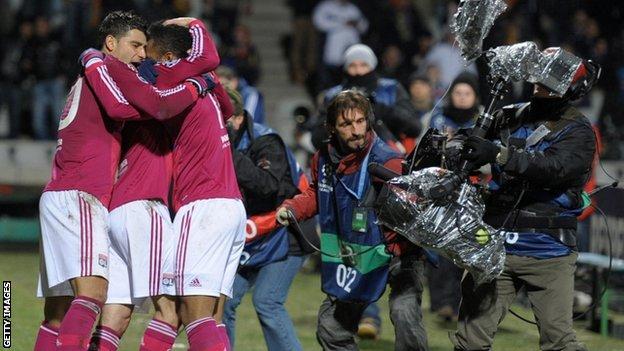 Lyon will take a slender advantage to Cyprus after failing to make the most of their overwhelming dominance in the first leg of their Champions League last-16 clash with Apoel Nicosia.

Alexandre Lacazette's deflected shot was the only one to beat Apoel keeper Dionisios Chiotis in a one-way contest.

Lyon's Ederson had chances either side of his team-mate's strike but could not get a scoring touch.

The visitors registered just one attempt on goal during the whole match.

Apoel are the first Cypriot side to make the knockout stages of the Champions League and manager Ivan Jovanovic may be content to return home with a single-goal deficit to overturn.

They had conceded three goals in six away games previously in the tournament and Lyon boss Remi Garde's decision to leave top scorer Bafetimbi Gomis on the bench looked unnecessarily cautious against such a defensive side.

After a slow start, Garde's side gradually turned a wealth of possession into an increasing stream of chances, but lacked the decisive touch needed to convert.

Winger Anthony Reveillere's shot was blocked by a clutch of defenders before Lacazette had Apoel goalkeeper Dionisios Chiotis scurrying to keep out a forceful effort in the best of their first-half chances.

Lyon stretched the Apoel defence further at the start of the second half, and the visitors' resistance was soon broken.

Ederson, sprung by a superb ball from Michel Bastos, had seen a shot cleared off the line by a sliding Paulo Jorge before the defender got the final touch on Lacazette's opener.

Jorge could do little to avoid the Lyon man's shot as it looped up and in via a deflection off his thigh.

Shortly after, Helios Pinto edged in front of Ederson to prevent him doubling the lead from Jimmy Briand's tempting ball across the six-yard box.

Although substitutes Yoann Gourcuff and Briand added energy to Lyon's attacks, their industry could not produce any more clear-cut chances.

With three minutes remaining of normal time, another substitute, Gustavo Manduca, finally exercised home keeper Hugo Lloris as the France international comfortably tipped over the visitors' only attempt on goal.