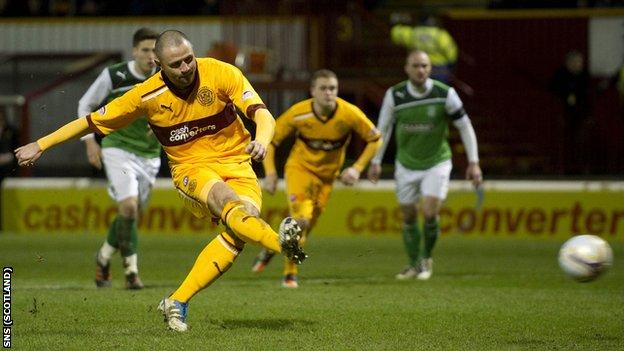 Motherwell moved to within three points of second-placed Rangers after beating Hibernian at Fir Park.

Jamie Murphy gave Well the lead for the first time only for Matt Doherty's deflected shot to equalise for Hibs.

Higdon completed his hat-trick with an overhead kick and another spot-kick before Ivan Sproule's late consolation for the visitiors.

Stuart McCall's side have now played the same number of Scottish Premier League games as administration-hit Rangers. Hibs remain level on points with bottom club Dunfermline, but Pat Fenlon's men have a better goal difference and a game in hand over the Fife side.

In a lively start, Griffiths fired wide and Higdon was denied by a last-ditch tackle by Doherty.

Griffiths also had an attempt saved by goalkeeper Darren Randolph before Hibs benefitted from a mistake to take the lead on 18 minutes.

Tim Clancy's header back towards Randolph was short and retrieved by Griffiths, who rounded the keeper and squared for Osbourne to tap home.

Motherwell tried to respond and headers by Higdon were blocked by keeper Graham Stack and defender James McPake.

Daley was also foiled by Stack after the winger fizzed in a shot.

Osbourne strode forward and blasted a left-foot shot wide from the edge of the box as Hibs preserved their lead until half-time.

Defensive uncertainty, this time in the visiting rearguard, led to the equaliser as Henrik Ojamaa pounced on Doherty's wayward header and was taken out by Stack, referee Steven MacLean promptly pointing to the spot.

Higdon converted from 12 yards on 47 minutes.

Ojamaa tried to take advantage of more hesitation by Doherty and put the ball in the net, but the referee brought play back for Ojamaa's challenge and also booked the striker for time-wasting.

At the other end, Osbourne set up Griffiths and the on-loan Wolves player's low shot was blocked by the legs of Randolph.

Daley was the architect of Motherwell's second, bursting towards the byeline and cutting across for Murphy to apply the finishing touch.

But Hibs soon equalised as George Francomb's corner found the head of Doherty and, although the defender's initial effort was blocked, his follow-up shot deflected past Randolph.

Murphy kept the attack alive and crossed for Higdon to beat Stack with an acrobatic effort in the 70th minute.

The Steelmen were not finished as Ojamaa made a nuisance of himself and was fouled in the box again, this time by Doherty, and Higdon claimed his treble with a second successful spot-kick.

Randolph narrowly avoided an own goal with a mis-hit clearance. But, from the resulting corner, Hibs pulled a goal back.

Sproule's shot was blocked, but the winger eventually forced the ball over the line as several Motherwell defenders tried unsuccessfully to scramble clear.