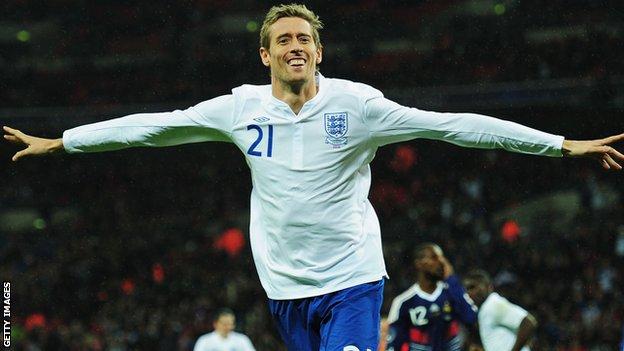 Stoke striker Peter Crouch is hoping that a change of England manager will resurrect his international career.

The 31-year-old has not played for his country since November 2010.

But following the departure of Fabio Capello as national boss, Crouch is hoping his form for Stoke, which has seen him score eight goals so far this season, will earn him a recall.

"I've not been in the last few squads, whoever takes over hopefully will start picking me again," said Crouch.

"But it's only what you do for your club that warrants getting in the England set-up again so I've got to play well for Stoke, score goals and hopefully that will come."

Crouch has represented his country 42 times, scoring 22 goals, or one every 1.9 games. In October he admitted he did not "carry much hope" of further appearances under Capello.

"I've felt like I've always done well for England and I feel like I've been doing well for Stoke, so of course it's disappointing [not to be selected in the England squad]," he said at the time.

Current Tottenham manager Harry Redknapp has emerged as the bookmakers' favourite to take the job, as well as being widely supported by players and fans, and his appointment would seem to offer Crouch his best hope of further recognition.

He has played under Redknapp on four separate occasions. The duo were together at Portsmouth when the Spurs boss was director of football there, and they were then reunited at Southampton.

Redknapp took Crouch back to Fratton Park for a second spell before signing him again once he had taken over at Tottenham in 2009.