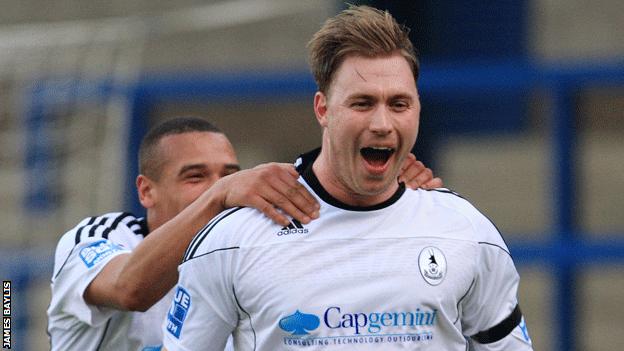 Adam Proudlock has been given the go-ahead to return to full training with AFC Telford United.

The ex-Wolves striker has been out for over three months after breaking his ankle against Gainsborough in October.

"It's great to be back. I'll be knocking on Andy Sinton's door as soon as possible to be playing again," Proudlock told BBC Radio Shropshire.

Telford were also buoyed by a 5-0 win over Mansfield, a friendly to sharpen the side after recent postponements.

Kyle Perry scored two, with one each from David McDermott, Nathan Rooney and Shane Killock.

Proudlock added: "I've been at Lilleshall for the past 10 weeks doing rehab and strengthening work.

"I've been doing some non-contact work with the rest of the players recently, but I can't wait to get going again."

Boss Sinton said: "Some intensive training and a couple of squad games and I'd see him back in the squad by mid-March, raring to go."

Marlon Jackson, who was on loan at Telford a short time ago, is back in training with parent club Bristol City after recovering from a hamstring injury.

The Bucks are hoping, once he's fully fit, to bring him back on loan again.