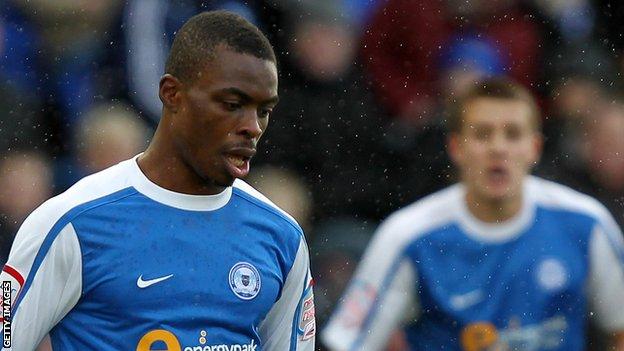 Peterborough United defender Gabby Zakuani has suffered a recurrence of the toe injury that disturbed the early part of his season.

The 25-year-old came off just before half-time in Tuesday's 3-1 loss at Cardiff to leave Posh desperately short of centre-half options.

"For Gabby to come off in any game means he's struggling because he normally plays through anything."

Zakuani did not train for three months between August and November, but managed to play games with the aid of pain-killing injections in his foot.

It was thought he had overcome the injury but he looked in considerable pain before being replaced by Mark Little.

"He had a problem with it in training so we knew he'd need an injection," added Ferguson.

"But knowing Gabby we felt he'd get through it, he's had that many. He was just in too much pain.

"We'll have to see how he is in the morning but he's in a lot of pain."

Fellow central defender leaving 21-year-old Shaun Brisley, who will arrive from Macclesfied later in the week, as Ferguson's only recognised centre-half.

"He'll be with us on Thursday," said the Scot. "But it's a big ask for a young boy like him to come straight into the Championship.

"I've said many times that perhaps we're looking for another centre-half with more experience when Benno goes.

"If Gabby's injured for a long time now it does give me a problem."