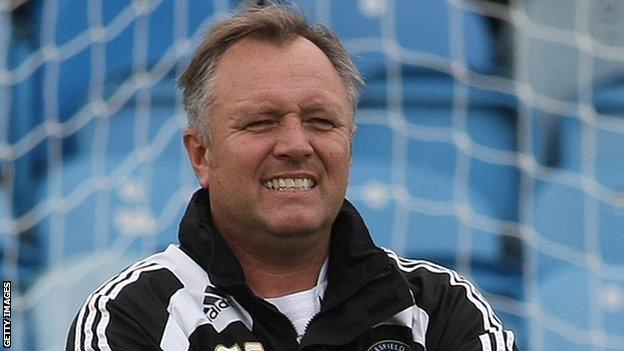 Macclesfield Town chairman Mike Rance believes the club are lucky to have Gary Simpson as manager.

The 50-year-old is approaching his second anniversary in charge after taking over from Keith Alexander.

"He's done a fantastic job - Gary's got a real eye for a player, and particularly young players," he told BBC Radio Manchester.

"I think he's widely respected for that and I feel we're fortunate to have him as our manager."

Simpson lead the Silkmen to 15th in League Two last season, in what was his first full season of management, after a testing year in which midfielder Richard Butcher died.

He was rewarded with a new two-year contract last summer but he continues to work with one of the smallest budgets in the Football League.

Rance also spoke about centre-back Shaun Brisley's move to Championship side Peterborough, which with add-ons could work out to be a record transfer deal.

"It's a very good deal and it's a great move for Shaun," Rance stated.

"He's got a four-year contract at a Championship club and that's what we're all about really.

"Players join us because they know they get to put themselves in a shop window and if they've got an opportunity to advance there careers then we won't stand in their way.

"He's got a long and hopefully successful career ahead of him and we're very proud of him."