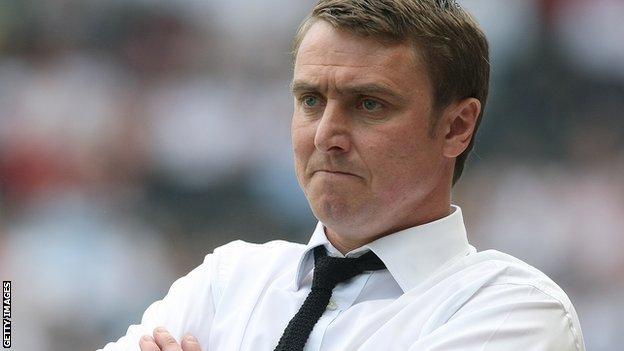 The 39-year-old, who had been in charge of the League One club since December 2008, leaves with the Terriers fourth in League One.

"I am very perplexed as to why I was dismissed as manager of Huddersfield," he said in a statement issued by the League Managers' Association.

"I'm extremely disappointed and shocked considering we're in a great position to compete for automatic promotion."

Clark, whose playing career included spells at Newcastle, Sunderland and Fulham, guided the club to last season's play-off final, where they were beaten 3-0 by Peterborough.

"Last night's defeat by Sheffield United was the last straw in a deteriorating relationship between Lee Clark and the Huddersfield Town board. When all is said and done Town have lost only three out of their last 55 league matches which, if nothing, just shows how high the standards are at the club. My understanding is that Mark Lillis will remain in charge indefinitely and the club won't be in a huge hurry to start the search for Clark's permanent replacement."

He presided over the longest unbeaten run in the club's history, which saw them go 43 regular season matches without defeat - a Football League record - before a 2-0 loss to Charlton in November.

The Terriers have lost twice more in the league since then, including Clark's final match, Tuesday's 1-0 home defeat by Sheffield United, which left them four points off automatic promotion.

Clark added: "We built on last season's momentum following the play-off final by creating history in the Football League record books for consecutive unbeaten games. This was an immense achievement by everybody connected with the club.

"I am massively proud of my record with Huddersfield and I enjoyed a fantastic relationship with the players, coaching staff, supporters and indeed everybody at the club. I now wish them all the very best for the future and hope they will ultimately achieve promotion this season."

BBC Sport understands that Clark was fired in a surprise two-minute phone call from chairman Dean Hoyle, who had not attended the loss to the Blades.

It is believed his case has been passed to the LMA and could lead to a claim for unfair dismissal.

"We still have an opportunity to achieve promotion and we have made this change with this in mind," Hoyle told the club website.

"This was a very difficult decision; one not taken lightly or in response to one result. Concerns have been raised in recent weeks.

"Lee and his coaching staff have put their all into the job over the past three seasons and has made a huge contribution to the club."

Academy manager Mark Lillis has been placed in temporary charge of the first team.