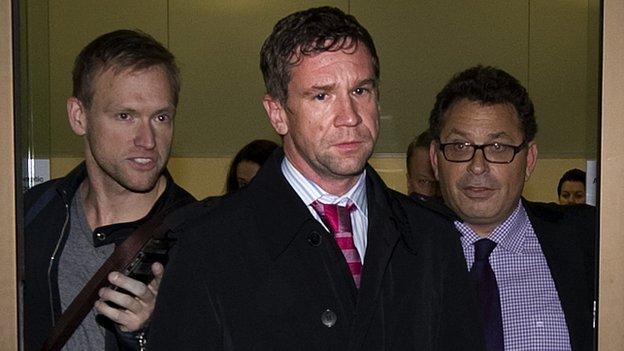 The Football League has accused Portsmouth's former owner Vladimir Antonov of misleading the football authorities at the time of his Fratton Park takeover last summer.

The surprisingly candid remarks came in an email exchange, seen by the BBC, between Pompey fan Paul Chalmers-Stevens and the Football League's customer services department.

"The steps taken by the Football League were based upon evidence of proof of funding, together with related business plans," it said.

"It appears that the evidence was at best misleading and possibly fraudulent with the league not being alone in accepting this evidence."

The BBC attempted to contact Antonov about these claims but was unable to reach him.

The 36-year-old stood down as the club's chairman on 29 November, five days after his arrest for alleged asset-stripping at a Lithuanian bank he owned.

His exit from Pompey coincided with the collapse of his sports business, Convers Sports Initiatives (CSI), the club's parent company.

This chain of events has left the Championship outfit needing bankruptcy protection as they face another winding-up petition from Her Majesty's Revenue and Customs (HMRC) over unpaid taxes totalling £5m-7m.

HMRC's action has led the courts to freeze Portsmouth's bank accounts, which means players and staff have not been paid since Christmas, and the move into administration will result in the Football League imposing at least a 10-point penalty on the club.

This sorry episode comes only 17 months after Portsmouth exited the administration that confirmed their relegation from the Premier League in 2010.

That spell of insolvency protection - a Premier League first - followed an ignominious period in the club's history that saw Portsmouth change hands three times in a season.

The last of those owners, the Hong Kong-based businessman Balram Chainrai, "reluctantly" re-emerged as the club's owner when it left administration in October 2010. It was he who sold Pompey to Antonov's CSI.

Chainrai remains the club's most significant creditor and is currently calling the tune via CSI's administrator Andrew Andronikou.

The UHY Hacker Young partner was Chainrai's choice of administrator for Pompey in 2010 and he is, for all intents and purposes, already repeating the role now.

Andronikou has so far been unable to find a buyer for Portsmouth, or any of CSI's other assets, although he has persuaded the Premier League to release the club's next instalment of parachute money a month early.

This sum, £1m, is part of the £48m that Portsmouth receive from the Premier League over four years until 2014.

Once the move into administration has been confirmed, the courts will allow Andronikou to access this money and the rest of the club's reserves, which are thought to total £2.5m.

This should enable the club to fulfil this year's fixtures and provide some time for new owners to come forward.

Andronikou and Chainrai have come under increasing political pressure in recent weeks to engage in meaningful dialogue with fans' groups, particularly the Portsmouth Supporters' Trust, which would like to find a community-based solution for the club's troubles.

A supporter-based alternative to just another "white knight" owner is currently under discussion, although some fans have called on the football authorities to take a considerably harder line with the club in order to force it to honour the commitments it made to creditors of the parent company that went bust in 2010.

With the first 20p-in-the-pound payments from that deal due in April, and no sign of any agreement on who should pay in full the numerous local businesses owed less than £2,500 in 2010, there are concerns about further unpaid bills and disgruntled creditors.

All of this will come as a crushing disappointment to Portsmouth's senior management, who feel they have managed to stick to the spending plans agreed in October 2010 whilst putting a young and competitive team on the park.