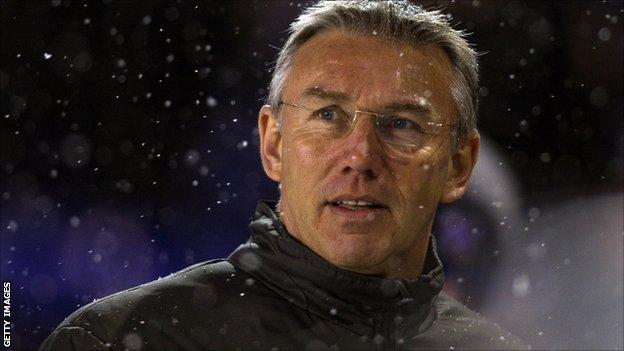 Southampton manager Nigel Adkins believes his side are well placed for a promotion push following their 1-1 draw with West Ham at Upton Park on Tuesday.

Saints drew 1-1 with leaders West Ham to remain in the automatic promotion places and remain just a point behind the Championship leaders.

However, the result opened the way for the chasing pack to reduce the gap.

"There is a belief about us and everyone is going to give it a right good go," Adkins told BBC Sport.

Cardiff City are now just three points behind the Saints, while Blackpool moved to within four, but Adkins is convinced his side have what it takes to win promotion to the Premier League.

"We are in good shape, (we) create chances and (we) will score goals and that is important heading into this final stage of the season," he added.

Having started slowly on Tuesday, Adkins' side grew into the game, and with a man advantage, looked the more likely of the two sides to take all three points.

And the Southampton boss admitted to having mixed feelings about the result, adding: "It was a great game for the supporters.

"We've taken four points from West Ham which is a good return against the side top of the table and we would have taken that before the season.

"I'm pleased to have got a point but there was an opportunity for us to get all three. They defended resolutely and I'm sure they'll be happy with a point."

He added: "We wanted to win, but that is four games undefeated now.

"We are the team disappointed not to have won it. We've got 15 games left and they are life-changing."

Tuesday's game was full of contentious decisions, with Billy Sharp giving a penalty away for a tackle on Mark Noble, while the Saints player later went to ground after an altercation with Matt Taylor, who was red carded as a result.

"No, in my opinion it's wasn't a penalty. He didn't touch him," said Adkins.

On Taylor's red card, Adkins added: "The referee has been put in a position where he has had to make a decision, there was a coming-together."