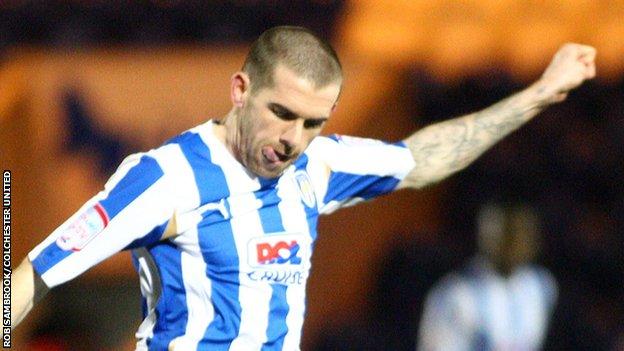 Colchester United striker Steven Gillespie has admitted his frustration at losing his place in the U's starting line-up, despite his goalscoring form.

The 26-year-old netted twice off the bench in Tuesday's win over Brentford after sitting out the 1-0 victory at Leyton Orient.

He had scored in his two previous games before being left out.

"I was disappointed to say the least. I was angry. I was upset," the former Cheltenham forward told BBC Essex.

"I thought I deserved to start at Orient after scoring a couple of goals in the previous games.

"He's thinking about the team, not Steven Gillespie. The side's won at Leyton Orient."

Gillespie's brace in the 2-1 defeat of the Bees means four of his six goals this season have come in his last three games.

But he is unsure why boss John Ward has demoted him to the bench in his side's last two outings.

"I want to play games. I'm raring to go but it's the manager's decision.

"All I can do is do what I did against Brentford and give the gaffer something to think about."

Ward, who oversaw Colchester's first back-to-back wins since December, added: "He's got to be prepared for the decisions I make.

"My life is full of making decisions on people and I upset some and I please some and I have to stand and fall on them."