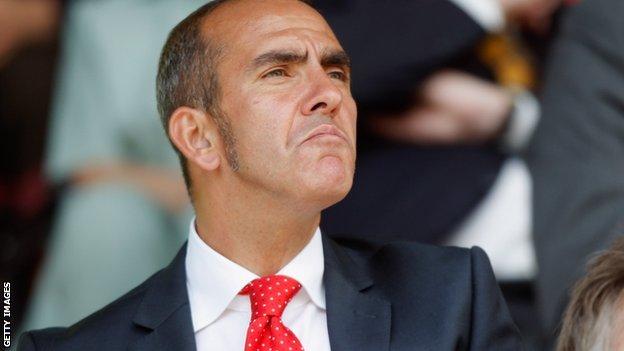 Swindon manager Paolo di Canio has thanked the Football Association for giving him a touchline ban.

The 43-year-old Italian served the first game of his two-match suspension during Tuesday's 3-0 win over Crawley.

"Not ironically, I want to thank the Football Association for giving me the opportunity to watch the game from the stands," he told BBC Wiltshire.

"I give them permission to ban me for the rest of the season. We will win the league anyway."

Di Canio was sent to the stands in the win over Macclesfield and was issued with the touchline ban after being found guilty of improper conduct.

It is the second suspension he has served this season, having sat out of the win over Rotherham after being charged for his overzealous goal celebrations against Northampton.

He continued: "I don't have homework because usually if I stand in the dugout I have to watch the game again as I don't have a clear picture.

"If they want to ban me again they can do. My team now knows what they are doing now."

He's improved a lot and has become more mature. He can play a part in our run for the title

Meanwhile, Di Canio has expressed his delight at the form of youngster Billy Bodin.

Earlier in the season, the 19-year-old forward struggled to keep a place in the Robins squad and was sent out on loan to Torquay.

But since his return, Bodin has scored two goals in three games, including a stunning curling effort in Tuesday's victory.

"We knew he was happy at Torquay and could play regular football and I couldn't force a player to stay.

"Once it was clear we wanted to keep him, he realised he had a part here. I saw him in a training session and he was really free in his brain so I gave him the opportunity straight away.

"He's improved a lot and has become more mature since I arrived here. I had other options but I played him as he can play a part in our run for the title.