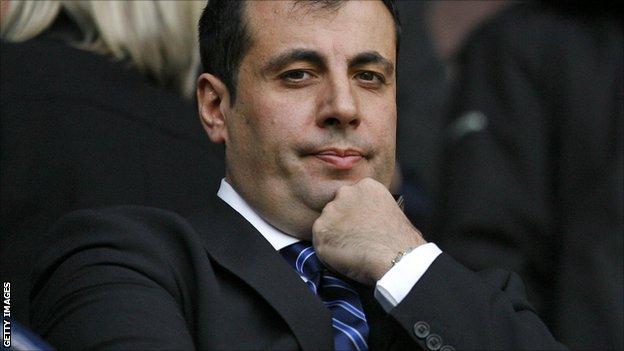 Andrew Andronikou has confirmed to BBC Radio Solent his firm has been recommended by Portsmouth to handle their proposed administration.

Andronikou oversaw the club's last administration two years ago, and is currently handling the same process with Pompey's parent company.

On Monday the club made an application to go into administration with that hearing due to take place on Friday.

The club became the first Premier League side to enter administration in February 2010, following which they were relegated to the Championship.

It is believed Pompey currently owe HM Revenue and Customs £1.9m in unpaid tax as well as between £4m to £7m from the previous regime.

They were issued with a winding-up petition by HMRC on 3 January, and the club were due at the Royal Courts of Justice on 20 February, before the administration order.

The club announced in January that their players and staff had not been paid their wages for that month, as a result of having their bank account frozen.

They later failed to gain a validation order to gain access to their accounts, leaving players and staff at Fratton Park still waiting to be paid.

Former owner Balram Chainrai last week said he was flying to the UK to sort out the stricken club's future.

The Hong Kong-based businessman, who owned the club with Israeli Levi Kushnir through a company called Portpin, is still owed £17m.

BBC South understands that any new purchaser would need to provide £12m as proof of funds, and assurances they could meet another £20m in repayments to former creditors, Chainrai and Alexandre Gaydamak.

However the Portsmouth Supporters' Trust have claimed that Andronikou is asking them to provide £100m in proof of funds before any meeting between them could take place.