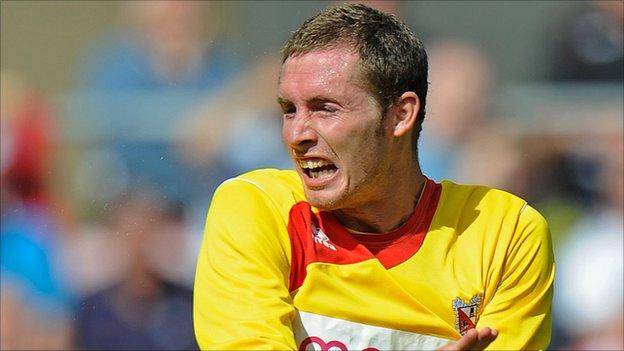 Gateshead manager Ian Bogie has said he intends to use the loan market to bolster his squad, particularly with injuries to strikers.

Nathan Fisher and Liam Hatch are absent for the trip to Forest Green Rovers, while Jon Shaw is a doubt and Yemi Odubade the only fit forward.

"We couldn't bring anyone in tonight because they would have been ineligible," Bogie told BBC Newcastle.

"It's something we'll possibly have to look at for Saturday's game."

Shaw was the latest of Bogie's centre forward to become injured, when he suffered a groin injury in Tuesday's rescheduled FA Trophy third round tie against Alfreton.

"Jon's been having problems with his groin over a matter of weeks,"

"We've managed him through training sessions, but tonight he overstretched and he's had to come off.

"We'll have to monitor him over the next couple of days, get him scanned to see how severe the injury is."

Shaw, 28, has scored 30 goals for the Tynesiders in all competitions this season.