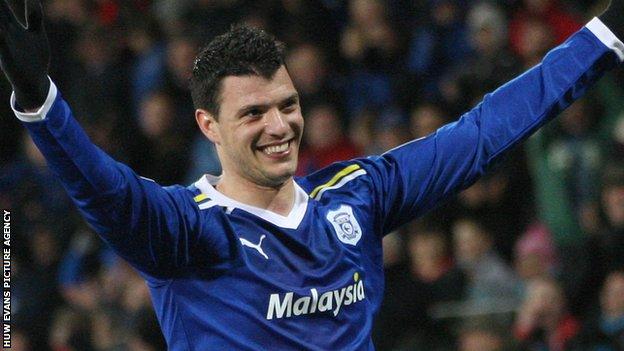 On-loan midfielder Haris Vuckic has said he is open to extending his stay at Cardiff City until the end of season.

The 19-year-old Newcastle United player recently joined the Bluebirds on an initial one month loan.

Vuckic scored his first goal for Cardiff in their 3-1 win over Peterborough and would be happy to stay longer at the City Stadium.

"If the club's get an agreement to extend, that would be great," he said.

Having made his Bluebirds debut in Saturday's 2-1 defeat at Leicester, Vuckic scored Cardiff's second goal in the victory over Peterborough.

And the Slovenia Under-21 international believes his loan spell at Cardiff will help his development and the aim of becoming a Newcastle regular.

"I really want to play. I know Newcastle is my first team but if I get chance to play for Cardiff on loan until the end of the season that would be great," he added.

"I've found it [the Championship] a little bit harder than the Premier League.

"In the Premier League I had more time. Here they tackle you straight away.

"You have to switch on and the mentality is totally different. Everybody works hard. It's harder but I will get used to it."

Cardiff returned to winning ways against Peterborough having lost their previous two matches against Blackpool and Leicester City.

Vuckic admits confidence was low following those two defeats and a victory was much needed to reignite Cardiff's promotion campaign.

"After the Leicester game we had a meeting and we went through what we did wrong and what we did right," he said.

"The confidence was quite low. We really wanted to win this game so we really push on.

"We deserved to win. We pressured them straight away. We won all the tackles and we had more chances than them and scored three goals.

"I was really happy to score the goal and [to] help the team [get] the win. But the most important [thing] is the team's doing well."

Vuckic will be available for all of Cardiff's Championship games up to an including the trip to Bristol City on 10 March.

However, he will be ineligible for the Carling Cup final against Liverpool on 26 February having played in an earlier round for Newcastle.

"I would love to play against Liverpool at Wembley. That would be a great experience," he said.

"But I will be in the stadium [to] support my team-mates and hopefully we will win the Carling Cup."