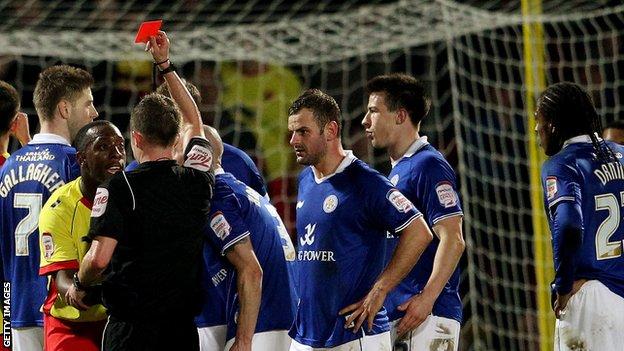 Watford boss Sean Dyche has criticised the officials in Tuesday's 3-2 win over Leicester, branding late confusion over a substitution as "unacceptable".

Dyche was angered when he was unable to get Carl Dickinson off the bench to help defend a free-kick following Lloyd Doyley's sending off.

"We were trying to get a man on," he told BBC Three Counties Radio.

"Our man runs five yards onto the pitch and he allows the free-kick to be taken. That's unacceptable."

Doyley was given his marching orders in injury time after being adjudged to have prevented a clear goal-scoring opportunity for striker Jermaine Beckford.

The Hornets were able to defend the resulting free-kick and hold out to extend their unbeaten run to four games.

"I haven't seen the incident again," added Dyche. "I didn't think it was a red card because of the amount of bodies around the incident.

"I can't be sure if it was a penalty or not. What goes on after that was bizarre.

"I can't judge every referee's decision and I think I've been fair to them this season, saying 'it's a tough job', which it is.

"But that with a ref, a linesman, a fourth official and another linesman there it's unacceptable in my opinion.

"I'd like to know what they've got to say about it. That's the final kick more or less. It's right on the edge of our box and we're not allowed to get our sub on who was going to go and join the end of the wall."