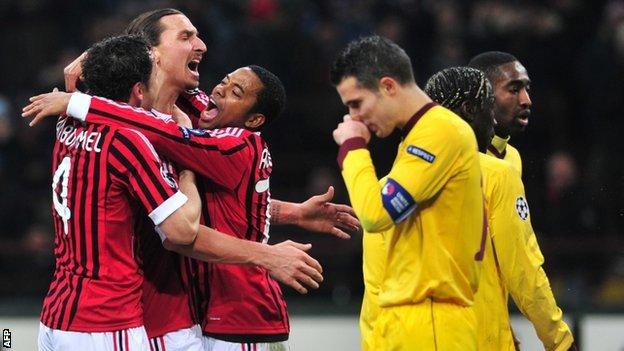 Arsenal boss Arsene Wenger described his side's 4-0 last-16 first-leg hammering by AC Milan as "shocking" and the result as "a disaster".

Wenger admits his side are all-but out of the Champions League following their worst defeat in European competition.

The Frenchman said: "We don't live in a dream world. There is maybe a 2% or 5% chance statistically, but realistically we are out of this competition.

"We made mistake after mistake and we were punished."

He added: "We were never in the game. We were very poor offensively and defensively.

"It was shocking to see how we were beaten everywhere. It was our worst performance in Europe by far.

"There was not one moment in the 90 minutes we were really in the game, and it was always the same problem, balls over the top and we were well beaten."

Wenger's side lacked defensive shape and failed to provide any ammunition for their forwards as they were outclassed at the San Siro.

The Gunners went behind in the 15th minute when Kevin-Prince Boateng was allowed space to fire in and they never looked like getting back into the game.

Former Manchester City forward Robinho headed in from close range and then capitalised on a slip from Thomas Vermaelen to fire low past Wojciech Szczesny.

Zlatan Ibrahimovic compounded their woes by adding a fourth from the penalty spot after he was brought down in the box by Johan Djourou.

Arsenal's only real sight of goal came in the 66th minute when Robin van Persie saw a shot palmed away by home keeper Christian Abbiati.

"I thought Arsenal were coming here to get a result, losing 1-0 wouldn't have been a bad result. All of Milan's players have been in great form and it's the best I've seen them play for a long time."

Wenger added: "You question everything on a night like that but it's difficult to analyse and it's better not to talk too much, analyse it with a cooler head and to regroup for the next game.''

At a similar stage last season, Arsenal saw their campaign fall apart in the space of just under two weeks.

They were beaten by Birmingham in the League Cup final and were subsequently knocked out of the Champions League by Barcelona and the FA Cup by Manchester United. Their title challenge faded soon after.

With an FA Cup last-16 tie away at Sunderland on Saturday, followed by league games against Tottenham and Liverpool, the Gunners must rally from Wednesday's result to prevent a similar slide in fortune.

"The season is not finished," insisted Wenger. "We have a big game on Saturday and it is a good opportunity to show we have character and mental strength, that we can respond after such a shocking defeat.

"You could blame and blame, but we have to stick together and win the next game."

"We played a perfect match, especially in defence,'' said Allegri. "We played very well as a team, we didn't give them any goalscoring chances. We deserved this night, this win. It's the best game we've played this year.

"We could have scored more and it's a pity, but we have a good advantage. However, in London we need to play as a good a match as we did tonight. We have to play another 90 minutes and it won't be an easy match especially as they have nothing to lose.''