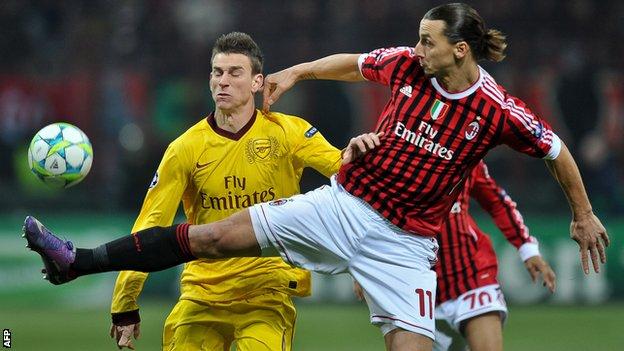 Arsenal are to assess the state of Laurent Koscielny's knee injury after the Frenchman joined fellow centre-half Per Mertesacker on the sidelines.

Koscielny was withdrawn in pain during Wednesday night's 4-0 Champions League defeat by AC Milan in the San Siro.

Following Mertesacker's injury in Sunday's 2-1 win at Sunderland, it has left manager Arsene Wenger with threadbare options at the back.

In a defeat described by Wenger as the club's "worst performance in Europe by far", Vermaelen - who has only recently from a four-month lay-off with an Achilles injury - struggled to keep pace with the rampant home side.

The Belgium international lost Kevin-Prince Boateng in the run-up to the former Tottenham Hotspur man's brilliant opener before slipping to allow Robinho to blast home the third.

Switzerland international Johan Djourou, who replaced 26-year-old Koscielny in the 44th minute, was involved in the late penalty incident that sealed Milan's victory.

And Wenger now has decisions to make as to who will occupy his back line for Saturday's FA Cup fifth round meeting with Sunderland.

Midfielder Alexander Song could be asked to fill the defensive role he carried out for the final 24 minutes at the San Siro for the foreseeable future.

Sebastien Squillaci has only played in the FA Cup victory against Leeds United since his part in Arsenal's collapse at Fulham on 2 January, while 19-year-old Spaniard Ignasi Miquel lacks top-level experience.

Mertesacker is currently undergoing scans in his native Germany with the national team doctor to assess the extent of his ankle ligament damage, but the summer signing from Werder Bremen is expected to be out of action for at least a month after collapsing in agony at the Stadium of Light.