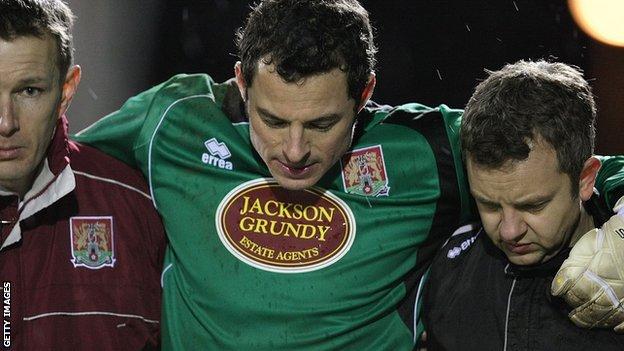 Goalkeeper Chris Weale has returned to Leicester City after a knee injury dashed hopes of him extending his loan spell with Northampton Town.

Weale, 30, picked up the injury in Tuesday's 1-0 win over AFC Wimbledon.

Speaking after the game, boss Aidy Boothroyd indicated that he had hoped to retain Weale.

"I want to keep all the players that we've got. We'll have to see where we are with Chris because of the injury," he told BBC Radio Northampton.

The Cobblers are already without keeper Shane Higgs, who suffered an Achilles injury in training in January.

Bermudian international Freddy Hall and youngster Neal Kitson are waiting in the wings if Boothroyd cannot secure another custodian before their League Two match against Macclesfield on Saturday.