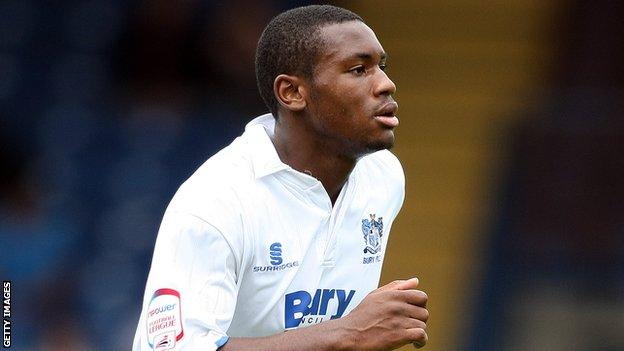 The Shakers have spent most of the season in the top-half of the table and lie nine points off sixth place.

"I don't think settling is ever a good job, you want to get as high as you can go," he told BBC Radio Manchester.

"We have got enough definitely to push to the play-offs but I know our focus is staying in the league. Once we have achieved that we see where we can go."

The 22-year-old has started just four of his 22 appearances this season, but has managed to net four times.

The former Lincoln striker recently signed a new one-year contract at Gigg Lane and is now looking to add to that tally.

"I've always said I just want to get goals and it's come from November, December and January," he added.

"Even last season before Bish [Andy Bishop] got injured, watching [Ryan] Lowey and Bish and I was learning off both [of them].

"Obviously there is a bit of competition as we're playing one up top, but I just want to carry on doing what I'm doing.