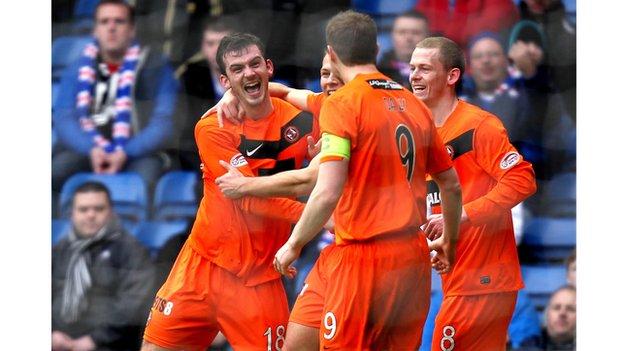 Dundee United will not provide Rangers with tickets for next month's game at Tannadice unless they receive assurances that they will be paid.

If not, United, who are due £80,000 from their Scottish Cup win at Ibrox, will sell away tickets themselves for the 17 March encounter.

Dunfermline have also expressed concern they will not receive gate money.

But Inverness say they have been assured they will be paid ahead of Rangers' visit at the end of the month.

A United spokesman said: "We sympathise with Rangers situation and their fans are welcome at Tannadice, but unless we receive assurances regarding payment we will not give them tickets to sell but will sell them ourselves."

"Rangers have got 10 days to pay, so we're still waiting to find out what's happening with the administrators.

Inverness struck a more positive note, with chairman Kenny Cameron saying: "I personally spoke to both the administrators and the SPL on Wednesday regarding our ticket revenue from Rangers and I am very confident following these discussions that any sums due will be paid in due course.

"We are due to play Rangers on Sunday 26 February and as is normal practice, away tickets were sent to them for sale several weeks ago and we would under normal circumstances expect them to reimburse us the cost of the tickets, within agreed timescales, as set out between the clubs."