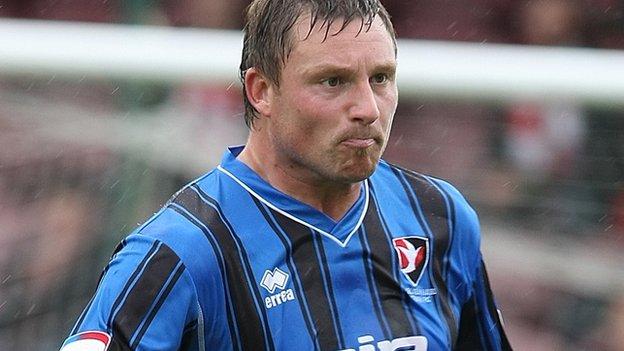 Cheltenham manager Mark Yates says the return of defender Steve Elliott will have a 'massive' impact on his side.

Elliott, 33, has been out with a calf injury for five weeks but should return for the game against Dagenham and Redbridge on Saturday.

During his absence the promotion chasers have only managed to take seven points from six games.

"It's a massive boost for the group and results have shown that we've missed him," Yates told BBC Gloucestershire.

"As long as there's no reaction he'll be in on Saturday."

And Yates believes Elliott, who has made 71 appearances during his 18 months at Whaddon Road, will come back stronger from his time on the sidelines.

"He's had a right blasting off the physio in the last month and he's been able to get a lot of work done in the gym," said Yates.

"He looks fit and strong and ready to go again. He'll be a bit short of game time, but there's no question about his fitness and he's looking good."

Meanwhile, Russ Penn has been undergoing tests on an ongoing injury problem.

The midfielder has not played for more than an hour since Christmas and it was thought he was suffering from a hamstring strain.

But further scans have revealed he has a problem with the sciatic nerve in his back.

"There's something there but it's more of a pelvic injury or back alignment," added Yates. "He'll keep going to the chiropractor but we believe there's no injury there to keep him out for a little while.

"He'll be in [the squad], he's been in training. I thought it was the best he's played on Tuesday night for quite a while."

Cheltenham are currently second in League Two, level on points with leaders Southend.