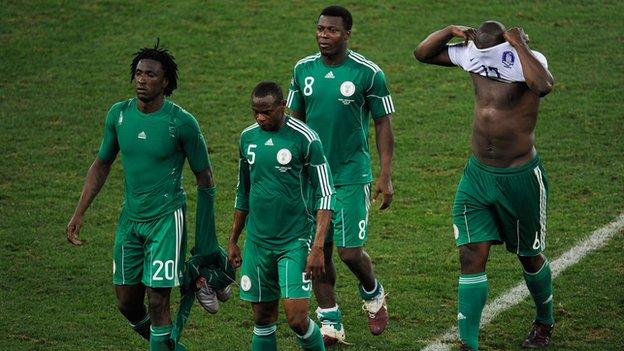 They have been included in the provisional line-up for Nigeria's opening game of 2013 Africa Cup of Nations qualifying.

But there is no place for Chelsea star John Obi Mikel, who has been left out of the line-up because of a lack of playing time for his club.

The Super Eagles play Rwanda on 29 February in Kigali.

Everyone must fight for the right to be selected

Ayegbeni, Kaita and Etuhu were all dropped from the Super Eagles set-up after their disappointing performance during the 2010 World Cup in South Africa.

But with Nigeria subsequently failing to qualify for the recent-completed Nations Cup, new coach Keshi has given them another chance.

The former skipper has named a squad with a blend of European and locally-based players in his bid to rebuild the faltering side.

"There is no guarantee that playing in Europe is enough to get into the Nigeria squad. Everyone must fight for the right to be selected," Keshi told BBC Sport.

"I don't care where you play, if you fit into my plans and you are committed, then you will get a chance to prove yourself.

"Competition is important, then add discipline, commitment and dedication, hopefully that will restore respect and support from the fans."

Ayegbeni has scored 13 league goals in the English Premier League for his struggling club Blackburn while Kaita and Etuhu are expected to plug the holes in midfield.

According to the Nigeria Football Federation (NFF) technical director, Emmanuel Ikpeme, the eleven foreign based players are expected in camp on 26 February.

The 20 locally-based players that beat Liberia 2-0 in a friendly on Wednesday in Monrovia will remain in camp in Abuja until Keshi settles on his final squad.

Nigeria failed to qualify for the 2012 Cup of Nations in Gabon and Equatorial Guinea which led to the sacking of previous boss Samson Siasia.